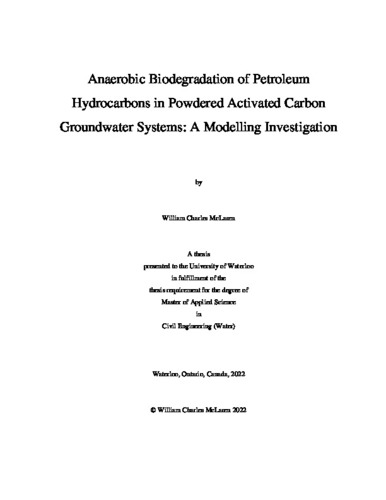 Subsurface contamination by petroleum hydrocarbons (PHCs) is a widespread issue resulting from oil and gas production, distribution, and use. As a result of improved injection methods and particulate materials, injected permeable reactive barriers (PRBs) have gained popularity as a remedial method to cut off groundwater plumes and protect downgradient receptors. The use of particulate activated carbon (AC) as an injected amendment has grown due to its proven capability to adsorb organic contaminants, including PHCs, and potential to enhance biodegradation rates. It has been suggested that AC particulate amendments can establish a dynamic equilibrium between adsorption, desorption, and destruction through biodegradation which prevents downgradient migration of PHC plumes indefinitely. The overarching goal of this research was to develop a modelling framework to simulate benzene, toluene, and o-xylene (BTX) sorption and biodegradation in bench-scale experimental systems containing powdered activated carbon (PAC) and to investigate if biodegradation was enhanced in the presence of PAC. A batch reactor model was developed to simulate non-linear, hysteretic and competitive sorption, and biodegradation representing the conditions of bioaugmentation culture vessels as well as a series of microcosm experiments. The microcosms contained aquifer solids and/or PAC and were subjected to different biological conditions (e.g., bioaugmentation cultures). All microcosms contained either a single compound (toluene) or multiple compounds (BTX). A one-dimensional (1D) reactive transport model was also developed which included the processes simulated in the batch reactor model and was deemed representative of an in situ PAC treatment zone. This permitted investigations into sorption hysteresis and PHC breakthrough, as well as exploratory scenarios examining the impact of contaminant mass loading and biodegradation kinetics on the performance of a hypothetical PAC treatment zone. Using an existing set of single and multi-compound isotherm parameters determined for the PAC used, the batch reactor model was able to simulate the steady-state aqueous BTX concentrations observed in microcosm experiments with no biodegradation. A comparison between simulated and observed solid phase concentrations for microcosms with PAC indicated that desorption hysteresis was minimal. The calibrated kinetic parameters showed improved biodegradation (higher maximum specific growth rate [μmax] and lower half velocity constant [KS]) for the compound with the highest sorption affinity compared to the bulk solution (toluene in single compound systems and o-xylene in multi-compound systems). 1D investigative scenarios demonstrated that differences in maximum specific growth rate and half-velocity constant (calibrated kinetic parameters for the PHCs) were the most influential factor affecting aqueous effluent PHC concentrations and cumulative PHC mass decayed, while BTX mass loading (a change in flow rate or influent concentration) had a minimal impact. A hypothetical scenario meant to represent biofilm formation on PAC where the maximum specific growth rate was an assumed function of biomass concentration significantly decreased effluent PHC concentrations and increased cumulative PHC mass decayed, suggesting that improved kinetics (i.e., higher maximum specific growth rates) resulting from biofilm formation may lead to more effective long-term PHC treatment. Overall, the batch reactor and 1D models were able to simulate complex single and multi-compound sorption in bench-scale systems with and without biodegradation. Additionally, there is evidence demonstrating that PAC improves the degradation of compounds with high sorption affinity relative to the bulk solution in a batch reactor system. While mass loading had minimal impact on treatment effectiveness in a column system, improved kinetics (i.e., lower half velocity constant and/or higher maximum specific growth rates, such as through the formation of a biofilm) lead to significant treatment. The developed and validated modelling framework can be used as a foundation for future models to aid in the design and data interpretation of field-scale AC particulate amendment PRBs involving PHCs and other organic contaminants.