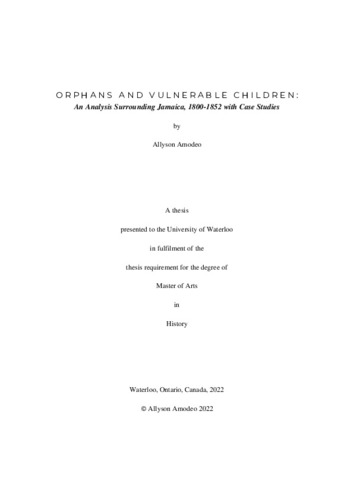 This article traces the experiences of orphans and vulnerable children (OVCs) during the British slave trade between 1800-1852, while looking specifically at connections to Jamaica. The British set out to colonize, ‘civilize,’ and control Black parents, children, and bodies throughout Jamaica, as particularly shown through enslavement practices and governmental regulations implemented that impacted notions of safety, protection, and autonomy for Black families. Such practices and regulations changed and evolved as abolition, apprenticeship, and emancipation came into effect. Although the legal landscape was changing, the horrific systemic abuse against Black people remained the same. Yet, there is evidence that even within that broad system of British-implemented and enforced control, there were frequent moments of collective care, resistance, and bonds formed between both kin and fictive kin within Black communities. Although Empire, in general, tended to silence voices of the subaltern, and especially their children, this thesis explores the ways in which members of those communities shaped that control and fought to be heard.