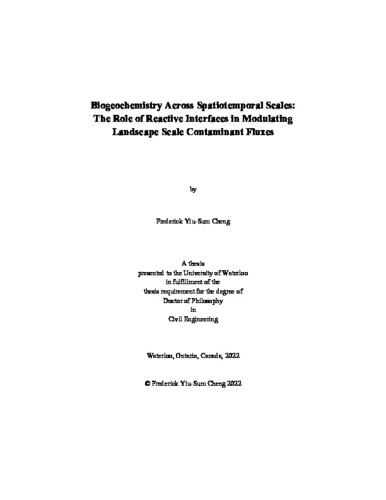 The intensification of agricultural and urban activities has been accompanied by increased fluxes of nutrients to inland and coastal waters, leading to concerns of eutrophication and drinking water contamination. Certain areas in the landscape can intercept, remove or retain nutrients and other contaminants at much higher rates than the overall landscape. While there has been extensive work documenting the extremely dynamic behaviour of these reactive interfaces, watershed-scale models are unable to explicitly capture the spatiotemporal heterogeneity of reactive interfaces. In this thesis, I developed methodologies to explicitly represent different reactive interfaces across the upland-stream continuum using a combination of data synthesis and deterministic modelling. In Chapter 2, I quantify the role of wetlands in retaining nitrogen (N) at the watershed across the US at the annual time scale. Here, I combined spatially explicit datasets of nitrogen surplus and wetland location to demonstrate that current N removal by US wetlands is limited by a spatial disconnect between high-density wetland areas and N hotspots. Simulations of wetland restoration scenarios also showed that spatially targeting areas of high N surplus can greatly increase N retention compared to current practices. I further explore the behaviour of wetland N retention with a focus on sub-annual temporal dynamics in Chapter 3. Using a reduced complexity model with thirty years of remotely sensed wetland inundation levels across eight wetlandscapes in the US, I show that the consideration of transient hydrologic dynamics can increase N retention estimates compared to steady-state models. This effect was more apparent in smaller, isolated wetlands, where the limited outflows of water limited the loss of N and increased the time for denitrification in the wetland. Next, I explore another common reactive interface found in agroecosystems: the hyporheic zone (HZ). While the HZ is often considered a sink for agricultural contaminants such as nitrogen, its role in modulating other contaminants is less clear. In Chapter 4, I developed a mechanistic HZ model to quantify the fate and transport of estrogen, an emerging contaminant in agroecosystems. Using the model, I show that the HZ actually functions as a source and increases the temporal persistence of estrogens in the stream network. Finally, I developed a coupled CN biogeochemical model to a humid water balance model to further our understanding of water fluctuations on nitrogen fluxes in Chapter 5. While the water table is commonly ignored in CN modeling, I show that consideration of water table fluctuations modify the CN export by modulating the redox conditions and altering the transport mechanisms and should not be ignored. My results show that reactive interfaces have complex spatiotemporal behaviours driven by the interactions between the hydrological and biogeochemical processes. Through the use of data synthesis and deterministic modelling, I quantify various environmental factors that contribute to the functionality of reactive interfaces and developed methodologies that can help decision makers predict and mitigate the contaminant fluxes from agroecosystems to protect our water resources.