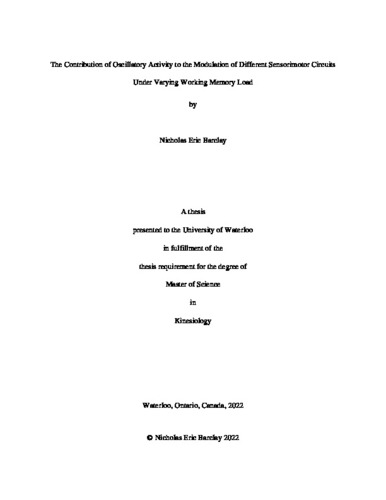 Goal-directed movement requires a series of highly coordinated voluntary motor outputs, which need to adequately integrate information from the body’s internal and external environments to be executed successfully. The integration of sensory information to inform motor output is known as sensorimotor integration. Sensorimotor integration involves afferent projections to the primary motor cortex (M1) via multiple sensorimotor loops. These sensorimotor loops eventually converge on the corticospinal neuron (CSN) to determine motor out. However, the specific groups or circuits of interneurons targeted by the different sensorimotor loops are not known. The current study combined controllable pulse parameter transcranial magnetic stimulation (cTMS) with electroencephalography (EEG) to assess the association between oscillatory brain activity in different brain regions and sensorimotor integration in the M1 measured by short-latency afferent inhibition (SAI). To facilitate the quantification of any association, both oscillatory brain activity and SAI were measured during a working memory task under varying working memory demands. SAI circuits were probed using three different cTMS configurations, posterior-anterior (PA) current with a 120 μs duration (PA120), anterior-posterior (AP) current with a 120 μs duration (AP120) and AP current with a 30 μs duration (AP30). Increased working memory load reduced SAI across all three current configurations. However, the magnitude of the reduction decreased from PA120 to AP120 to AP30. SAI-EEG associations revealed that the effect of working memory load on SAI was modulated by the amount of parietal alpha and frontocentral low beta activity. The current results suggest several sensorimotor circuits converge on the CSN, all receiving similar projections from various brain regions under working memory load. It seems that distinctions across the circuits are dependent on other unique modulatory projections, which are not probed by working memory load.