Examining the relationship between boredom and creativity 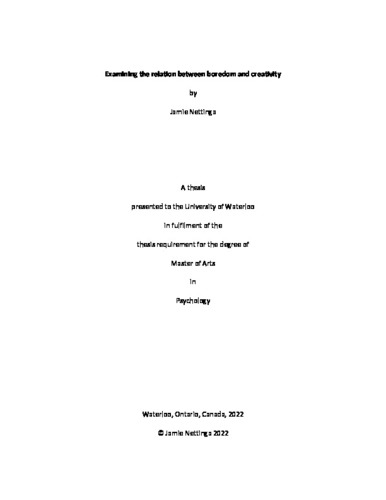 Popular sentiment expresses that boredom leads to creativity despite a lack of research investigating the relationship explicitly. Across two experiments this thesis examined the relations between both state and trait boredom and creativity. Experiment 1 explored these relations by inducing boredom and having participants complete a divergent thinking task. In addition, trait level self-reported creativity and boredom proneness were measured. Results indicated that state boredom was in fact associated with poorer performance on the divergent thinking task and trait boredom proneness was associated with diminished belief in creative potential and lower levels of engagement of everyday creative pursuits. Experiment 2 utilized a novel, creative foraging task and again found no relation between state or trait boredom and creativity. Overall, the findings of these studies suggests that neither state boredom nor trait boredom proneness leads to or promotes creative output, although further research is needed in order to determine how boredom may be associated (or not) with creativity and creative behaviours.