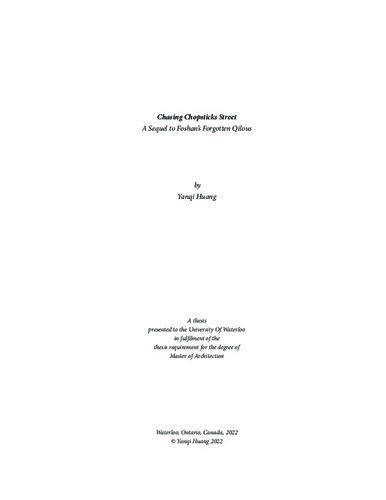 Since China’s economic reform in the late 1970s, large extents of its cities’ vernacular urban fabrics have been replaced by state-of-the-art high-rises in a building frenzy that was equally unprecedented in its destructive endeavours. Devasted were not only physical relics passed down from ancestors, but also the intangible heritage – memories, values, and rituals embodied in the architecture – that connected a people to its cultural roots. As local distinctiveness was sacrificially offered to a ubiquity of anonymous skyscrapers, the alarming loss of collective remembrance and identity awakens a fervor to reintegrate the past – in its meagre remains – into the modern-day city. Yet, contemporary practice, from the preservation of iconic buildings to the commercial-romanticization of entire historic districts, often bestow upon urban relics a seeming immutability that in effect jeopardizes their communicative potency to convey the age-honoured tales and customs orchestrated by the architectural artefacts. This thesis explores alternative intervention strategies for vernacular buildings in the historic inner-city, to withdraw them from modern obsolescence and to perpetuate their role as active hosts of living traditions in the contemporary city. The investigation focuses on a cluster of dilapidating shophouses, locally called “qilous,” on Chopsticks Street in Foshan, China, one of the few remaining swatches of the city’s historic core. The study searches for insights from the Chinese attitude towards the past, the shifting and the resilient patterns, examining contemporary and historical texts to understand the underlying political, economic, and philosophical influences. It dives into the macro-histories and micro-stories of the qilou’s maritime typological genealogy and intimately local significance, observed and documented through a process of drawing by hand. It finally proposes design interventions for three qilous on Chopsticks Street, presented through a series of hand-drawn narratives, inspired by cinematographic approaches, accompanied by short poems. The stories, at once visual, architectural, and metaphorical, seek to unveil the buildings’ accreted past and embodied significance in a contemporary language that can be perceived and interpreted by people today, and continue to cue cultural rituals for present and posterity.