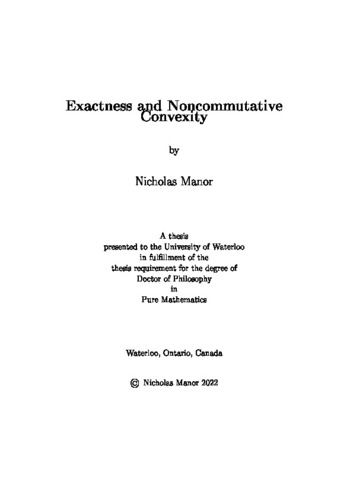 This thesis studies two separate topics in connection to operator systems theory: the dynamics of locally compact groups, and noncommutative convex geometry. In Chapter 1 we study exactness of locally compact groups as it relates to C*-exactness, i.e., the exactness of the reduced C*-algebra. It is known that these two properties coincide for discrete groups. The problem of whether this equivalence holds for general locally compact groups has recently been reduced by Cave and Zacharias to the case of totally disconnected unimodular groups. We prove that the equivalence does hold for the class of locally compact groups whose reduced C*-algebra admits a tracial state. In Chapter 2 we establish the dual equivalence of the category of generalized (i.e. potentially non-unital) operator systems and the category of pointed compact noncommutative (nc) convex sets, extending a result of Davidson and Kennedy. We then apply this dual equivalence to establish a number of results about generalized operator systems, some of which are new even in the unital setting. We develop a theory of quotients of generalized operator systems that extends the theory of quotients of unital operator systems. In addition, we extend results of Kennedy and Shamovich relating to nc Choquet simplices. We show that a generalized operator system is a C*-algebra if and only if its nc quasistate space is an nc Bauer simplex with zero as an extreme point, and we show that a second countable locally compact group has Kazhdan's property (T) if and only if for every action of the group on a C*-algebra, the set of invariant quasistates is the quasistate space of a C*-algebra. In Chapter 3 we expand on recent work of C.K. Ng about duals of operator systems. Call a nonunital operator system S dualizable if its dual S* embeds into B(H) via a complete order embedding and complete norm equivalence. Through the categorical duality of nonunital operator systems to pointed noncommutative convex sets discussed in Chapter 3, we characterize dualizability of S using geometric conditions on the nc quasistate space K in two ways. Firstly, in terms of an nc affine embedding of K into the nc unit ball of a Hilbert space satisfying a bounded positive extension property for nc affine functions. Secondly, we show that Ng's characterization is dual to a normality condition between K and its real nc cone. As applications, we obtain some permanence properties for dualizability and duality of mapping cones in quantum information, and give a new nc convex-geometric proof of Choi's Theorem.