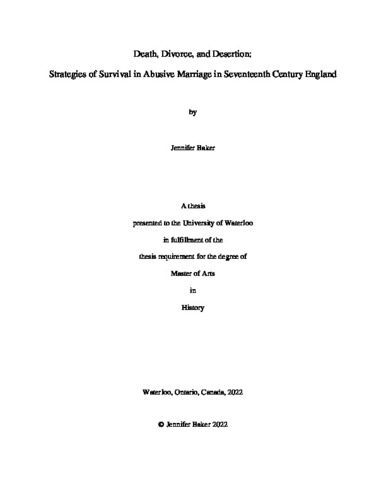 This thesis demonstrates how seventeenth century English women in abusive marriages employed limited survival strategies to separate from their violent husbands. It explores the ecclesiastical and magisterial court systems built on deeply rooted political, religious, and cultural attitudes towards women, marriage and marital violence, using urban London cases during the last quarter of the seventeenth century as a lens through which to observe the social and legal toleration of violence in the marriage without commensurate punishment. By using cases from across the social hierarchy, what emerges is a picture of a society deeply affected by the political and religious upheaval that began in the sixteenth century and influenced cultural attitudes towards marital violence that merely reasserted earlier systems of gendered marital hierarchy even as it reframed and redefined these systems of authority. Longstanding canon law defined the possible ways women might secure a separation and survive financially without remaining in an abusive relationship through divorce or desertion by reason of cruelty that changed little over the centuries. The narrow avenues available to women also presented a third option: murder. The limits of social toleration bound authority and the seventeenth century English toleration for violence in the family made it difficult to define and demonstrate when marital violence had crossed from legitimate methods of correction to illegitimate forms of abuse. Establishing this burden of proof was one of an abused wife’s most significant obstacles in court and shaped their approach even as social ideals and perceptions of women shaped how the court viewed women. Most women never experienced excessive violence in their marriage. While these cases are exceptional, they also exemplify the deep-seated religious and socio-cultural customs that shaped normative ideals that tolerated this abuse. Despite the extreme physical, sexual, mental, and emotional assault that violated contemporary notions of reasonable modes of correction, these cases demonstrate how society, the church, and the state understood the abuse, failed to punish the violence, and at the same time allowed the violence to be a legitimate ground for women to separate themselves from abusive husbands. In this way, it is possible to use the exceptional to illuminate everyday attitudes.