Do primary and secondary psychosocial stressors vary in their effect upon plasticity-related proteins? 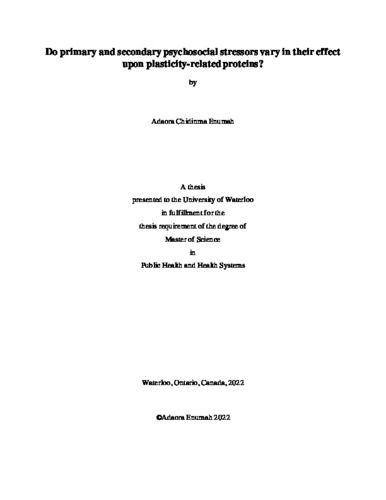 The generous distribution of glucocorticoid receptors (GRs) is a primary reason for the widespread effects of stress on all biological systems. The prefrontal cortex (PFC), which is crucial in executive functioning, is one of the brain regions where GRs are most abundantly expressed, and as such the PFC is affected by numerous neuropsychiatric disorders associated with psychosocial stress. Glutamate receptors are responsible for mediating the vast majority of excitatory signals in the mammalian brain, including the PFC, and their modification is a neuroplastic change that may occur during stress. Although most of the stressors that have recently plagued humans have been more psychosocial than physical, most previous studies have focused on physical stress. With the above points in mind, the present study explored the effect of primary and secondary psychosocial stress on several important plasticity-related proteins in the PFC: the expression of several AMPA and NMDA receptor subunits and the phosphorylation of the major serine residues of GluA1 (a key AMPA receptor subunit). Notably, existing studies have tended to focus upon male rats, hence, this study aimed to explore sexually dimorphic changes. From 6 litters, 4 male and 4 female Sprague-Dawley rats per litter were stratified by sex, and then randomly distributed into stress and control groups. In the stress group, each pair of rats was housed together in the same cage and were randomly assigned to receive either platform stress (PS), or bystander stress (ByS). Similarly, among each control animal group, rats were randomly allocated to either the platform control (PC), or bystander control (ByC) condition. The PS rats were placed on a small, elevated platform for 30 minutes twice daily for 5 days, and were returned back to their cages (which also housed the ByS rats) immediately after each stress exposure, while the PC animals were simply moved to another cage during the same period. All rats were sacrificed approximately one hour after the final stress exposure, and the synaptoneurosome preparation technique used to enrich synaptic proteins from the dissected PFC samples; after this, proteins of interest were examined via Western blotting. In most cases, the general pattern of effect from both PS and ByS was an increase in AMPA and NMDA receptor subunit expression, although ByS tended to cause a more notable degree of change. In particular, ByS significantly increased the expression of GluA1 (77%) and GluN2A (87%) in male rats. As well, there was a significant difference in the ByS-related effects on pSer845-GluA1 levels between male and female rats (male phosphorylation levels were 51% greater). In summary, the psychosocial stressors applied appeared to selectively affect the plasticity-related proteins studied, with ByS appearing to have a more substantive effect overall, and male rats displaying more changes compared to female rats.