Transit-Induced Gentrification in Weston and Mount Dennis: A Mixed-Methods Analysis 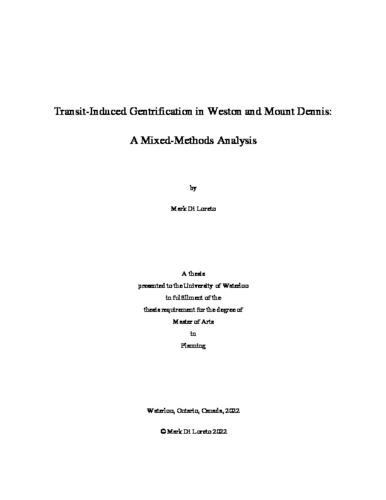 As Toronto commits to increase investments in rapid transit across the Greater Toronto Hamilton Area (GTHA), there is an increasing need to ensure existing residents are able to benefit from these new connections. Weston and Mount Dennis are two examples of neighbourhoods that have received major public transit investment and are susceptible to significant neighbourhood change. Most transit-induced gentrification studies depend on quantitative analysis, with little to no consideration for nuanced qualitative examination and often underestimate the number of displaced residents. For this reason, we conducted a mixed-methods study to understand what extent public transit investment has contributed to processes of gentrification in Weston and Mount Dennis. Analysis of census data determined were that there were no conclusive signs that gentrification has occurred in these neighbourhoods as of 2016. Interviews with key neighbourhood stakeholders revealed detailed accounts of neighbourhood change occurring in these areas before, during and after construction of new transit. While the quantitative and qualitative analysis rendered different findings, this outcome provides us with additional data to assess the strengths and weaknesses between different research methods to better understand the most efficient ways to measure gentrification moving forward. Our findings indicate that census analysis does not conclusively indicate gentrification has occurred while interviews with key stakeholders provide perspectives that indicate early signifiers of gentrification in these neighbourhoods.