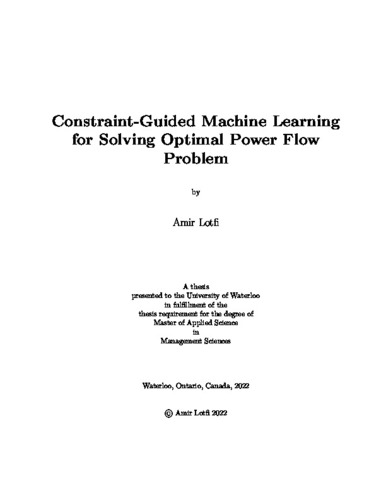 Due to the nonlinear and non-convex attributes of the optimization problems in power systems such as Optimal Power Flow (OPF), traditional iterative optimization algorithms require significant amount of time to converge for large electric networks. Therefore, power system operators seek other methods such as DC Optimal Power Flow (DCOPF) to obtain faster results, to obtain the state of the system. However, DCOPF provides approximated results, neglecting important features of the system such as voltage and reactive power. Fortunately, recent developments in machine learning have led to new approaches for solving such problems faster, more flexible, and more accurate. In this research, a Deep Neural Network-based Optimal Power Flow (DNN-OPF) algorithm is implemented on small to large case studies to show the accuracy and efficiency of the ML-based algorithms. Since the ML methods such as NN are considered black-box approaches, the system operators are not satisfied with solving power system models using them, as such methods do not explain the reasoning behind the generated solutions. Moreover, there is no guarantee that the obtained solutions would be converging and close to optimality. To overcome such issues this research provides a novel approach to first classify the converging and non-converging ACOPF problems, and then suggests a constraint-guided method, based on normalizing outputs and using particular activation functions to satisfy the technical limits of the generators such as maximum and minimum generation. Furthermore, a post-processing approach is incorporated to check for the convergence of the power flow equations which are in form of equality constraints. The suggested method is applied on IEEE24-bus, IEEE 300 bus, and PEGASE 1354 bus systems and the results show significant improvement on execution time, comparing to traditional gradient-based methods, such as Newton-Raphson and Gauss–Seidel methods. Also, the approach has been benchmarked against DCOPF model and it is shown that the proposed DNN-OPF not only provides faster speed, but also ensures higher accuracy on the final results. Furthermore, since is a need to run ACOPF problem using different scenarios, to account for continuous changes in the demand, the suggested DNN-OPF is solved for various scenarios from 1 to 10,000 to appreciate the improved execution time obtained from the ML-based approaches. Our results show that DNN can improve execution time a factor of 400 to 800 for large to small networks.