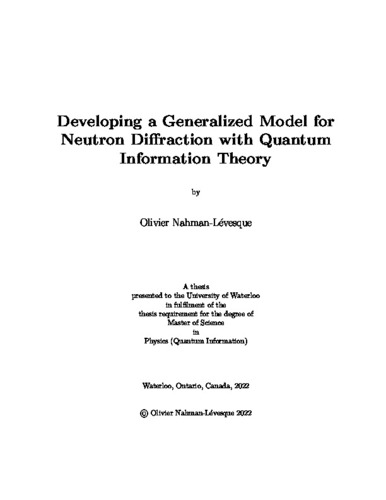 Due to their high mass and neutral electric charge, neutrons are often used at low energies to probe small-scale structures or measure fundamental constants of nature. To design neutron optical elements for use in these experiments, specific crystals are used which satisfy the desired properties for the element in question such as a lens, beam splitter, or waveguide. However, the mechanics which describe the neutron-crystal interactions are governed by the equations of many-body quantum mechanics, which are often implausible to solve exactly. With some clever approximations, such as approximating the strong nuclear potential as a delta function, it is possible to describe these interactions in a way consistent with experiment to a high degree of precision. Even then, these theories are only applicable to the most basic cases, such simple geometries containing no defects. If we wish to account for diffraction effect in more complicated cases, like might be required for neutron optical devices, the systems of interest must be solved through numerical simulation. One such a case is a situation where a neutron enters a perfect crystal close to Bragg angle. For large crystals, the theory which describes the state of the neutron as it progresses through the crystal is the theory of dynamic diffraction. While is has been verified experimentally, it fails under some circumstances such as when the crystal contains some defects or has an irregular shape. In 2016, it was observed that similar profiles to dynamical diffraction theory could be produced by looking at the intensity resulting from a one-dimensional quantum random walk. This thesis will describe how this idea can be generalized into a more complete description of the dynamical diffraction problem, which provides us with a mathematical tool to simulate the neutron state everywhere in crystals for which the standard theory is unsuitable. In recent years, there has also been some attention given to cold neutrons diffracting in curved crystals. Rather than approaching this system as a diffraction problem, it is possible to model the crystal as a linear potential in the radial direction, which results in quantum states similar to those found in other linear potentials, such as gravity. This work will describe how these ”centrifugal states” can be modeled for different experimental systems, which provides a strong theoretical baseline with which to compare experimental data.