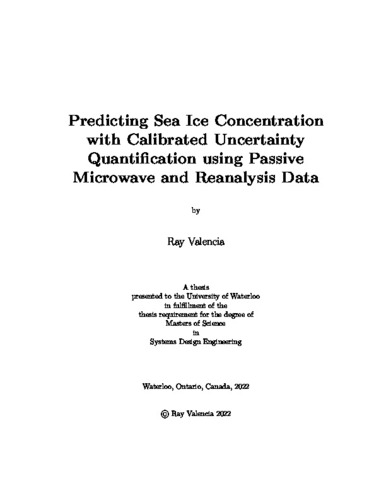 The adoption of deep learning (DL) techniques in the domain of remote sensing, and specifically sea ice concentration (SIC) prediction, using passive microwave (PM) data and atmospheric climate data has seen a growing interest. Given these predictions, it has been called upon to accompany predictions with their uncertainty, as a means to enhance quality and trustworthiness of results, which can be used in various climate applications in modelling and policy. Though, studies regarding uncertainty quantification (UQ) for SIC prediction has seen little interest. Within DL, there exists a subset of methodologies that work alongside prediction methodologies to effectively quantify uncertainty present within the model, as well as the uncertainty inherent in the data. Among these techniques include Bayesian Neural Networks (BNN's), and heteroscedastic neural networks (HNN's), where the former is used to measure model (epistemic) uncertainty and the latter data (aleatoric) uncertainty. For predicting SIC, and quantifying model and data uncertainty, we propose the use of a combined methodology using a heteroscedastic Bayesian neural network (HBNN) which follows the architecture of a multilayer perceptron (MLP) using PM and atmospheric data. Additionally, we explore the notion of calibration, and related methodologies as a means to evaluate the quality of uncertainties. The advantage of the proposed approach is its data driven nature for prediction and UQ, which is flexible to the context of the given data, such as in space or time. From the results of UQ, it was found that uncertainties vary throughout the seasonal ice cycle, where the months that coincide with melt-onset in the region are susceptible to the highest uncertainties. Additionally, within the study region, uncertainties were scattered, where highest uncertainties were found in areas near or in the marginal ice zone. It was also found that the inclusion of TB's in the feature space are most necessary to produce quality estimates of SIC, and the inclusion of atmospheric variables as input contributed to reduce uncertainty. Finally, when analyzing the effects of calibration on the model, it was found to yield quality and trustworthy predictions of uncertainty.