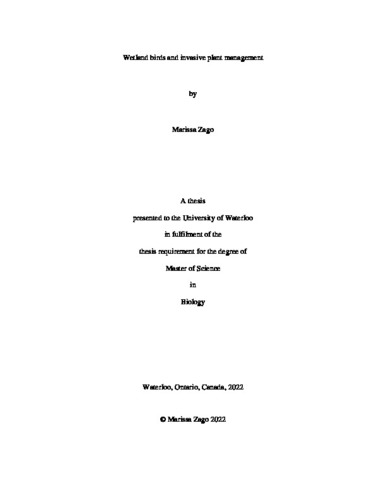 The Great Lakes coastal wetlands are some of the most diverse ecosystems in Ontario. However, their ecological integrity is continually threatened by development, nutrient pollution, and invasive species. Over the past two decades, marsh-nesting birds in the southern portion of the Great Lakes have experienced a substantial decline; approximately eight of 18 species have lower abundances now than they did in the mid-90s. Invasive Common Reed (Phragmites australis subsp. australis) is a grass that has been displacing native coastal wetland habitat for several decades, and it is a contributing factor to the decline in marsh-nesting species, particularly those of conservation concern. Long Point, ON, is a UNESCO Biosphere Reserve located Lake Erie, which is comprised of 13,465 ha of ecologically significant habitat experiencing invasion. To reverse damage from P. australis invasion and restore habitat quality for marsh-nesting birds and other wildlife, two invaded National Wildlife Areas in Long Point were treated with a glyphosate-based herbicide, followed by mechanical rolling to flatten dead P. australis beginning in 2019. The long-term outcomes of P. australis management are expected to positively impact the wetland bird community, but there have been limited studies investigating the short-term impacts that could arise from habitat alteration following treatment. Therefore, we undertook two studies to monitor the short-term response of marsh bird communities 1-2 years following P. australis management. First, we undertook a Before-After-Control-Impact study to monitor birds before and after treatment. Throughout the 2019 marsh bird breeding season, autonomous recording units (ARUs) were used to record bird vocalizations in areas where herbicide treatment of P. australis was planned for fall 2019 and in P. australis-invaded areas where no treatment was planned (control sites). These sites were resurveyed in 2021 to compare to 2019 baseline recordings. We determined that ARU recordings should be transcribed on one survey date in the middle of the breeding season, comprised of three 15 min segments split across the dawn chorus, to maximize avian richness estimates by capturing both early and late-morning vocalizing species. Second, we undertook a space-for-time substitution design. ARUs were deployed in 2021 to survey birds in invaded control sites, 1 or 2-year post-treatment sites, and uninvaded reference sites. For both studies, we assessed how avian species richness (both total and marsh-user) and community composition differed among vegetation type. We found small-scale effects of P. australis management on bird richness and community composition, but such effects are insignificant when compared to the natural variation in bird community composition in Long Point. Birds displaced by P. australis management tended to be non-marsh affiliated birds that can find refuge in surrounding habitats. Notably, the provincially and federally Threatened Least Bittern (Ixobrychus exilis) occurred infrequently in herbicide-treated sites, but it is expected that it will use the increase in hemi-marsh arrangement as time progresses. We conclude that two years post-management is too short of a timeframe to see the materialization of considerable positive effects on the avian community. However, we did find evidence of positive trends occurring to birds most impacted by P. australis invasion, as they were observed using, or have the potential to use, the increase in open water and hemi-marsh arrangement remaining after herbicide treatment. We recommend continued monitoring to assess the long-term consequences of P. australis control for the avian community.