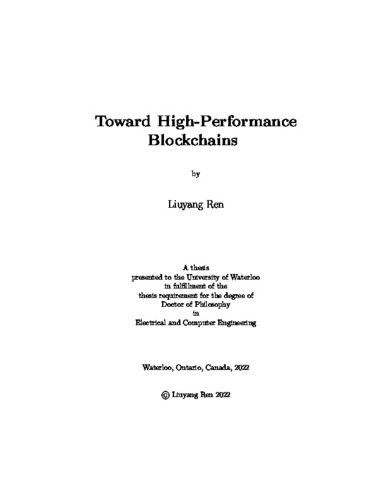 The decentralized nature of blockchains has attracted many applications to build atop them, such as cryptocurrencies, smart contracts, and non-fungible tokens. The health and performance of the underlying blockchain systems considerably influence these applications. Bootstrapping new nodes by replaying all transactions on the ledger is not sustainable for ever-growing blockchains. In addition, poor performance impedes the adoption of blockchains in large-scale applications with high transaction rates. First, in order to address the bootstrapping problem of already-deployed UTXO-based blockchains, this thesis proposes a snapshot synchronization approach. This approach allows new nodes to synchronize themselves with the rest of the network by downloading a snapshot of the system state, thereby avoiding verifying transactions since the genesis block. In addition, snapshots are stored efficiently on disk by taking advantage of the system state database. Second, although sharding improves the performance of blockchains by distributing the workload among shards, it leaves the duplicated efforts within a shard unhandled. Specifically, every node has to verify all transactions on the ledger of its shard, thus limiting shard performance to the processing power of individual nodes. Aiming to improve the performance of individual shards, this thesis proposes Collaborative Transaction Verification, which enables nodes to share transaction verification results and thus reduces the per-node workload. Dependency graphs are employed to ensure that nodes reach the same system state despite different transaction verification and execution orders. Finally, cross-shard transactions rely on expensive atomic commit protocols to ensure inter-shard state consistency, thus impairing the performance of sharded blockchains. This thesis explores ways of lessening the impact of cross-shard transactions. On the one hand, a dependency-aware transaction placement algorithm is proposed to reduce cross-shard transactions. On the other hand, the processing cost of the remaining cross-shard transactions is reduced by optimizing the atomic commit protocol and parallelizing dependent transaction verification with the atomic commit protocol. The above techniques are devoted to addressing the bootstrapping and performance problems of blockchains. Our evaluation shows that the first technique can significantly expedite the initial synchronization of new nodes, and the other techniques can greatly boost the performance of sharded blockchains.