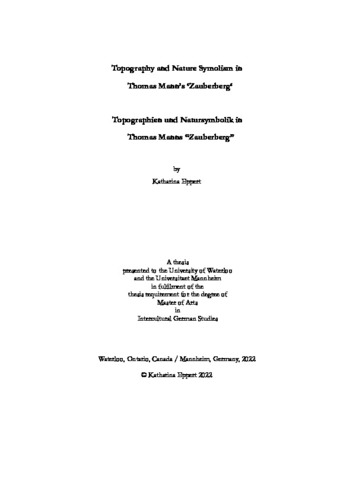 In my master's thesis I examine the meaning of topography and nature symbolism in Thomas Mann's novel "The Magic Mountain". I select text passages and chapters that exemplify the importance of mountains, height and snow for the whole story and inevitably lead to the question of whether the story would have worked in the lowlands. For example, the first chapter “Arrival” already resembles a journey to Hades if one looks at the topographical and natural symbolic references that Thomas Mann has skillfully interwoven. But nature, flora, and fauna, and above all the seasons, also play an important role in Mann's contemporary novel and underline the inner and outer movement of the protagonist Hans Castorp. In their fictionalized form of the novel, places such as the Berghof or Davos serve as a cipher that significantly reflects the tension of the whole plot and at some points leads to disorder or disorientation. Spatial movements can be found throughout the text, up and down, right, and left, but those also culminate in the chapter “Snow”, which is why I dedicate a focus of my work to that. On the one hand I examine the symbolic meaning of the snow, which can be seen both as a bringer of death and as a means of blurring the boundaries, on the other hand I deal with the spatial movement (internal and external) of Castorp - and to what extent he can be regarded as the only balancing figure in the novel. A symbiosis of opposites is created, for example, in snow and sea. The work demonstrates the importance of the mountains as the novel's spatial-theoretical setting and explains why flat land and sea are to be regarded as topographical and symbolic "opponents" and decisively advance the plot.