Planning for Decolonization: Examining Municipal Support of Indigenous-led Initiatives within the Settler Colonial Context of Canada 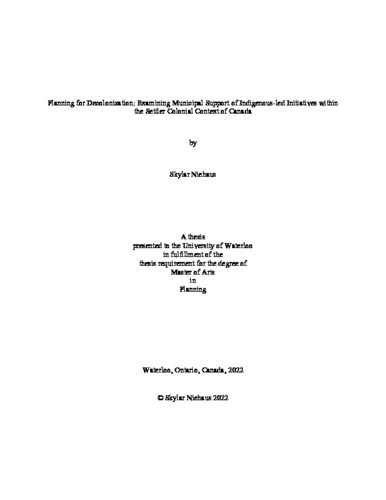 As a western cultural practice, planning is tethered to settler colonial logic, which results in the dispossession and harm of Indigenous peoples. Yet, within the context of ongoing recognition and enactments of reconciliation, planning has become increasingly invested in detangling the colonial logics embedded within itself, specifically when it’s been called upon by Indigenous communities to do this work. Illuminating this is O:se Kenhionhata:tie, Land Back Camp, a local Indigenous-led initiative that has organized around the provision of space by and for Indigenous communities within Kitchener-Waterloo, Ontario. In their organizing O:se Kenhionhata:tie has responded to the needs of local Indigenous communities by creating space for Two-Spirit and IndigiQueer youth, increasing the visibility of local Indigenous communities, participating in solidarity work, and engaging with municipalities to produce conditions that support their work such as the provision of land, funding, and administrative support. O:se Kenhionhata:tie’s work inspires the direction of this thesis, as it examines four case studies of municipalities within Canada that have engaged in reconciliation practices relating to the provision of space for Indigenous-led initiatives. In the cities of Edmonton, Alberta; Lethbridge, Alberta, Yellowknife, Northwest Territories; and Kingston, Ontario, Indigenous communities have engaged with urban municipalities regarding the provision of space by and for Indigenous communities. The purpose of this examination is to produce knowledge about the ways planning can aid in life making practices, instead of being a source of world ending for Indigenous futures. Through a content analysis, this thesis finds both moments within planning that support Indigenous futurity, along with the continuation of settler colonial logic. The latter of which results in a failure to support just Indigenous futures, decolonization, and Indigenous life-making practices. Along with building understanding about planning, the findings of this thesis also provide the basis for how municipalities can facilitate the creation, governance, operation, and funding of Indigenous spaces in manners that are supportive for Indigenous sovereignty, self-determination, and futurity.