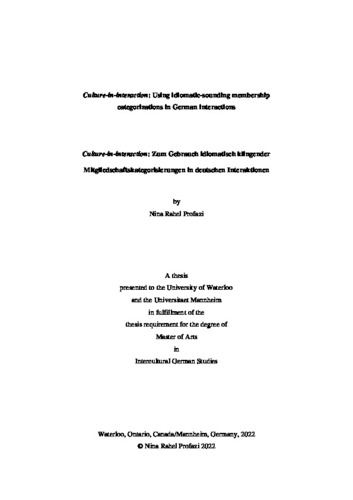 Understanding (Verstehen) and establishing common understanding (Verständigung) are foundational to human communication. Interactants not only work to understand their conversational partners, but they also act to ensure that they are understood correctly themselves. To this end, interactants use a wealth of linguistic and embodied resources which they tailor to their recipients and their communicative purposes in a given interaction. One such resource is the use of membership categorizations, a practice for positioning people within the realm of a jointly experienced world. Such categorizations (of self and others) can take on an idiomatic quality when they carry culturally specific knowledge, that is the communal common ground (Clark, 1996), of a social community. Following Stokoe’s (2010a) work on English, such categorizations as “ich als Mann” or “typisch Italiener” are glossed as “idiomatic-sounding membership categorizations” and examined in this paper for German, using a combination of Conversation Analysis (CA) and Membership Categorization Analysis (MCA). Natural conversations from the corpus FOLK (Forschungs- und Lehrkorpus Gesprochenes Deutsch), at the Leibniz Institut für Deutsche Sprache in Mannheim, Germany, serve as the data basis for this work. The data samples stem from private and institutional domains and include both co-present and telephone interactions. The study at hand provides a qualitative analysis of a collection of such categorizations in spontaneous interactions and will focus on describing their sequential position, as well as their interactional function. Results will show that idiomatic-sounding membership categorizations are used in a number of ways to achieve or maintain mutually shared understanding (intersubjectivity) between interactants. Firstly, and confirming prior findings on idiomatic-sounding membership categorizations, such categorizations are used as summaries of conversational sequences, indicating the speaker's understanding and stance toward the previous conversational action. Furthermore, they are systematically used for accounts, which are regularly employed to justify another person’s behaviour. New insights provided by this work is the use of idiomatic-sounding membership categorizations as an interpretive key at the beginning of a narrative multi-unit turn, thus guiding the reception of the story through the chosen categorical lens. Finally, they represent a linguistic resource for resolving delicate conversational situations and thus maintaining the social solidarity in interaction. The results of this study emphasize the importance of socio-cultural belonging in the process of understanding, as it is made relevant and negotiated in interaction for specific interactional purposes in concrete moments. Cultural knowledge is invoked as an interpretive key for ongoing actions and larger activities, thus providing a window into processes of identity construction, knowledge mediation, as well as the production and reproduction of social order.