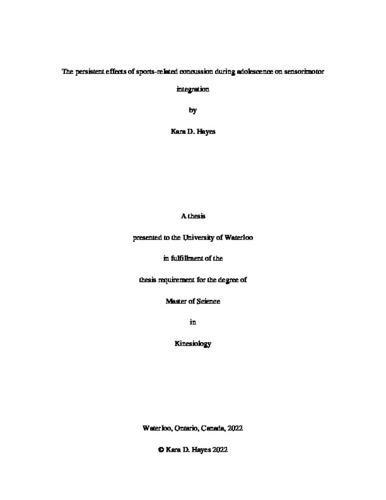 A history of concussion increases the risk of subsequent musculoskeletal injury. However, the exact mechanism of the increased risk of injury remains unknown. Persistent alterations in sensorimotor control during periods of high cognitive demand may be responsible for the increased risk of musculoskeletal injuries after concussion diagnosis. The current study used short-latency afferent inhibition (SAI) to investigate persistent differences in sensorimotor circuits in individuals with and without concussion history during a cued response time task involving motor planning and modulation. Thirty-two individuals who had participated in contact sports for at least three years as adolescents (13-18 years old) were recruited. Fourteen participants had a history of concussion, and eighteen had no history of concussion. SAI was quantified in the first dorsal interosseous muscle (FDI) during a cued finger response task. During the cued response task, participants were cued to a response finger. Cues were either valid (70% of trials) or invalid (30% of trials). To probe distinct sensorimotor circuits SAI was quantified using either posterior-anterior current for 120 μs (PA120) or anterior-posterior current for 30 μs (AP30) during both trial types. The novel finding of this study was that AP30 SAI decreased for invalidly cued, compared to validly cued, trials in those with concussion history. In contrast, AP30 SAI was not influenced by cue type in the no concussion history group. PA120 SAI was similarly reduced during invalidly cued trials across those with and without a concussion history. These findings suggest that individuals with a history of adolescent concussion have persistent adaptations to sensorimotor integration. The specificity of the adaptation to the sensorimotor circuits recruited by AP30 current during invalid trials suggests that those with a concussion history can generally adapt to offset the chronic effects of their concussion except under periods of high perceptual load. The breakdown of sensorimotor integration in these sensorimotor circuits could compromise motor execution during a period of high perceptual load and explain the increased risk of musculoskeletal injury following concussion recovery.