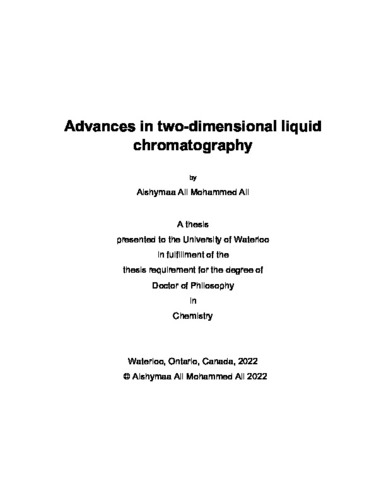 Comprehensive two-dimensional liquid chromatography (LC×LC) offers increased peak capacity, resolution and selectivity compared to one-dimensional liquid chromatography. It is commonly accepted that the technique produces the best results when the separation mechanisms in the two dimensions are completely orthogonal, which necessitates the use of gradient elution for each second-dimension fraction. Recently, the use of similar separation mechanisms in both dimensions has been gaining popularity, but full or shifted gradients are still used for each second dimension fraction. In this thesis, we argued that when the separation mechanisms are partially correlated in the two dimensions, the best results can be obtained with the use of parallel gradients in the second dimension, which makes the technique nearly as user-friendly as comprehensive two-dimensional gas chromatography. This has been illustrated in the second chapter through the separation of a mixture of 39 pharmaceutical compounds using reversed phase in both dimensions. Different selectivity in the second dimension was obtained through the use of different stationary phase chemistries and/or mobile phase organic modifiers. The best coverage of the separation space was obtained when parallel gradients were applied in both dimensions, and the same was true for practical peak capacity. The ever-growing demand for protecting the environment necessitates reducing or eliminating hazardous solvents to improve the environmental friendliness of analytical procedures. Acetonitrile is one of class II solvents which are hazardous to the environment and should be phased out and replaced by eco-friendlier alternatives. In the third chapter of the thesis, we introduced the use of propylene carbonate as an eco-friendly mobile phase component in comprehensive two-dimensional liquid chromatography to confirm the possibility of using this green solvent as an alternative to hazardous organic solvents. In this chapter, two sets of experiments were developed to separate the same mixture of 39 pharmaceutical compounds which used in the second chapter using Solvent-X (propylene carbonate: ethanol, 60:40) as a green organic modifier in the first dimension (1D) and ethanol in the second dimension (2D). Upon comparing the separation performance of these LC×LC systems to two systems described in the second chapter that used acetonitrile and methanol instead, no significant differences in terms of selectivity, peak capacity and orthogonality were found. Another set of comprehensive LC×LC systems were developed using Solvent-X or acetonitrile in the first dimension, while ethanol or methanol were used in the second dimension. The same stationary phases were used in the three systems, but the organic modifiers were changed in one or both dimensions in order to confirm that acetonitrile can be replaced by a green alternative without losing separation efficiency. There was no significant difference in terms of selectivity, peak capacity and orthogonality between the three systems. Finally, the fourth chapter introduced an application using propylene carbonate as a green mobile phase component to analyze complex natural product samples, such as grape juices and wine samples. In this chapter, novel green RPLC×RPLC-DAD and RPLC×RPLC-MS methods were developed for the first time to identify phenolic compounds in five samples (two red grape juice samples, two white grape juice samples and one dealcoholized wine sample). Four different RPLC×RPLC systems were developed; three systems were connected to a diode array detector (RPLC×RPLC-DAD), while the forth system was connected to DAD and MS detectors (RPLC×RPLC-DAD-ESI-MS). Solvent X (propylene carbonate: ethanol, 60:40) was adopted as a green organic modifier in the first dimension (1D) and methanol in the second dimension (2D). The practical peak capacity and the surface coverage were calculated as metrics to measure the separation performance of all proposed systems. The results revealed that the phenolic compounds were separated efficiently with good coverage of the 2D separation space and high peak capacity. A total of 70 phenolic compounds were tentatively detected based on MS data and information from the literature.