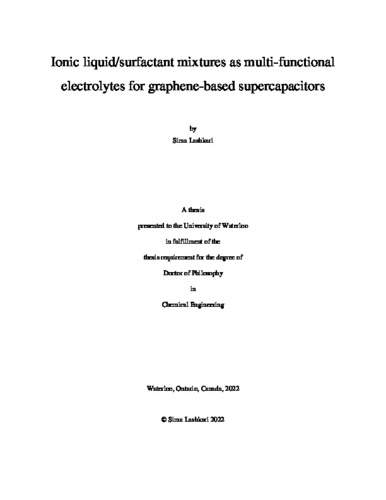 Supercapacitors store energy by the restructuring of ions at the electrode/electrolyte interface under an applied potential. Supercapacitors bridge the gap between batteries, which are high energy density devices, and electrolytic capacitors, which are high power devices. This makes them suitable for applications that require frequent, short bursts of energy. To increase their utility in commercial applications, supercapacitors with higher energy densities are desired. Therefore, considerable research efforts have focused on developing new materials systems that exhibit higher capacitance when formulated as an electrode and electrode/electrolyte combinations which enable stable, high voltage operation. To this end, the combination of graphene-based materials such as reduced graphene oxide (rGO) as an electrode material and ionic liquid electrolytes have shown significant promise. Graphene has one of the highest theoretical surface areas for double-layer charging, can pack into dense lamellar structures and can exhibit a high electrical conductivity while ionic liquids (ILs) exhibit the highest electrochemical stability window of all electrolytes. The main challenge with graphene-based electrodes is that the individual, atomically thin sheets tend to restack into low surface area, graphite-like aggregates. This lowers the ion-accessible surface area and thus capacitance of graphene-based supercapacitors. Thus, the main objective of this thesis, is to overcome the restacking problem by using ILs as both an electrolyte and physical spacer which defines the electrolyte-filled pore space between the restacked sheets to maximize the ion-accessible surface area. To do this, we investigate and build upon a newly discovered approach which utilizes non-ionic surfactants to deliver non-surface active, hydrophobic ILs to the surface of dispersed graphene oxide (GO) and rGO. When these IL decorated sheets are cast as electrodes, the adsorbed layer is expected to define the electrolyte-filled pore space, potentially maximizing the electrode capacitance. In the first study, we aimed to understand the nature of the dispersed and adsorbed phases and the important factors which impact the adsorbed layer structure for several combinations of IL and common non-ionic surfactants (Tween 20 and Triton X-100). The self-assembled structures for both surfactants, in combination with IL, appeared to be mixed micelles that spontaneously adsorb onto GO, forming a compact film. Using fluorescence labeling of the IL and surfactant phases, the adsorption behavior of these surfactant/IL micelle were quantified and compared at different adsorbent concentration. The adsorption quantity was found to be Langmuirian at lower concentrations of IL and sensitive to the adsorbent concentration, with lower adsorbent concentration leading to higher adsorbed amount. Atomic force microscopy is used to analyze the adsorbed layer thickness. The first plateau of the Langmuirian curve marks monolayer arrangement with ⁓ 1 nm thickness. Adsorption beyond this plateau leads to thicker (> 30 nm), inhomogeneous adsorbed layers. TX-100 behaves similarly to Tween 20, while it requires a lower ratio of TX-100/IL (i.e., 3 vs. 4 for Tween 20) to solubilize the IL, suggesting that it is a more efficient self-assembly vehicle for EMImTFSI. In the second project, we wanted to investigate the potentials impacts of leaving the non-ionic surfactant mixed with the IL on double-layer formation and ionic conductivity. Thus, we studied the double layer formed at the interface of IL/TX-100 mixtures with glassy carbon electrodes. In preliminary studies, we found that P123 can surpass the ability of TX-100 to self-assemble with IL. Using this surfactant, a stable dispersion of IL in water could be achieved at a P123/IL ratio of 1. Therefore we compared IL/P123 double layer performance with that of TX-100. A significant increase in the minimum capacitance is observed at 40 wt.% surfactant by up to 88% and 102% for P123 and TX-100, respectively. On the other hand, the higher viscosity of the mixtures, lowers the ionic conductivity from 8.5 mS cm−1 (neat IL) to 1 mS cm−1 (40 wt.% surfactant). Despite the significantly higher viscosity of P123/IL mixtures compared to TX-100/IL, both electrolyte series show the same reduction in ionic conductivity with respect to concentration. Pulse field gradient nuclear magnetic resonance was also used to show that for both electrolyte series, the diffusion coefficients follow a similar trend. In the final project, we used our fundamental understanding of the self-assembly process and the double layer performance of the mixed surfactant/IL systems to fabricate high density electrodes with improved performance. Using P123, as the surfactant with proven ability to lower the ionic correlation and solubilize IL at a lower P123/IL ratio, we formulated electrodes at different concentration of P123 using a low concentration of chemically reduced graphene oxide (i.e., 0.2 mg/ml) as an adsorbent for self-assembly and electrode active material. At each surfactant concentration, the IL/P123 ratio was varied to see the full spectrum of capacitance change with respect to self-assembly. The final dispersions were sprayed into liquid nitrogen and freeze dried (i.e., flash freeze dried) to lock in the adsorbed layer on rGO. This is because we found that these self-assembled structures are very dynamic and sensitive to concentration change which gradually increases during air drying. For 20 wt.% P123 at IL/P123=2 the gravimetric capacitance of 148 F/g and bulk density of 0.54 g/cm3, were obtained giving rise to maximum volumetric capacitance of 75 F/cm3. In contrast, for the 60 wt.% P123 (IL/P123=3) with highest gravimetric capacitance of 247 F/g, the volumetric capacitance of 45 F/cm3 was obtained due to lowered bulk density of 0.18 g/cm3. Overall, the gravimetric capacitance increased with increasing the total spacer mass, while the bulk densities of the electrodes continuously decreased. Nevertheless, comparing the theoretical bulk densities of our electrodes with the measured bulk densities uncover the presence of ⁓ 66 % porosity in our electrodes which can significantly boost the volumetric capacitance and overall performance of the device.