Ultraviolet Sizes and Morphology of Galaxies in the Coma Cluster 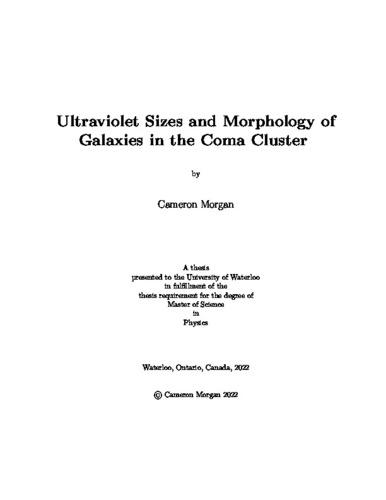 We present a study of the Coma cluster using ultraviolet (UV) imaging obtained using the Ultraviolet Imaging Telescope. We discuss methods for measuring sizes and morphology of galaxies in the UV. Several cluster galaxies in our sample exhibit small UV sizes relative to their optical sizes, while we find that galaxies in a field sample have similar sizes in UV and optical bands. Further, we have shown that when cluster and field galaxies are matched up one-to-one based on colour and absolute i-band magnitude, the cluster galaxies tend to have smaller UV sizes than their field counterparts. We have used an NUV − i colour magnitude relation to identify a red sequence and blue cloud of galaxies in our sample. There is a trend whereby redder disk galaxies exhibit even smaller UV sizes, relative to field counterparts, than galaxies at the bluer end of the spectrum. Since this result is consistent with environmentally driven gas stripping, we have identified from our sample six known stripping candidates, and further identified one new candidate. Additionally, we find that this sample of galaxies exhibits redder UV-optical colours in the outer regions of the galaxy, a result consistent with an outside-in quenching mechanism affecting the galaxy. Beyond the blue cloud, we find a substantial population of red disks/spirals in our sample; as high as 38% of galaxies using an NUV − i = 4.0 cut to separate blue and red galaxies. This result is highly dependent on the definition of the red sequence, however. The existence of red spirals has been discussed in the literature as a possible indication of starvation lowering the rates of star formation in previously blue spirals while not disturbing the overall morphological structure of the galaxy. We have discussed these results in context as potential indicators of various environmentally driven quenching mechanisms underway in the Coma cluster, and discussed future surveys that will allow a more robust quantification of the prevalence of these mechanisms.