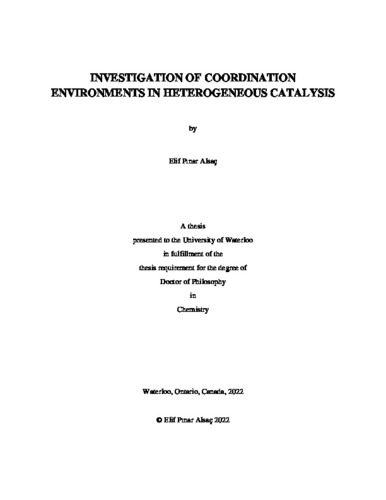 Increasing energy demand, environmental causes, and sustainable energy goals give rise to the study of energy conversion systems extensively. More efforts have been devoted to oxygen evolution reaction because of kinetic considerations and improving electrocatalytic behavior of a vast number of materials including both homogeneous and heterogeneous catalysis. In heterogeneous catalysis, a small number of catalytically active sites are believed to be involved in electrochemical reactions. The properties and coordination environments of these sites play a key role in the design of optimum electrocatalyst. However, direct analysis of the coordination environments is often challenging and requires more systematic analysis. This analysis can be done by a systematic perturbation of a system and measuring the structural and electrochemical response. This thesis focuses on the analysis of the identification of distinct coordination environments in nickel and cobalt hydroxides through structure-property analysis. Correlations between structure-activity and structure-property give information on the electrochemical activity and ultimately serve as a method to design more efficient and high-performance materials for various electrochemical energy conversion applications.