Some Mysterious Resonance Between Thing and Language: On Contradiction and the Materialist Theologies of Cormac McCarthy and Marilynne Robinson 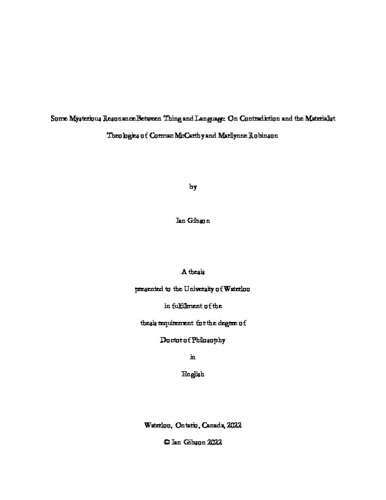 At first glance, the works of the contemporary American authors Marilynne Robinson and Cormac McCarthy look so distinctly unlike that they seem to represent opposing poles on a hypothetical literary spectrum. The fundamental inclinations of the two figures appear, at least initially, to be irreconcilable: Robinson is a committed Calvinist, writing essays and works of fiction that express some version of that faith, while McCarthy writes novels, plays, and a recent essay that are rigorously materialist, and in some instances apparently nihilistic. Scholarly efforts to consider these two authors together have been few and far between, though occasional attempts have noted the importance of a shared attention to language and narrative form. The poet Christian Wiman is one such scholar, who suggests, in his essay collection My Bright Abyss, that McCarthy and Robinson are bound by what he calls “genuine visionary feeling,” or the ability to express “some mysterious resonance between thing and language, mind and matter” (51). Taking this impulse as my starting point, I aim to articulate not only what such resonance—between human experience, materiality, and literary form—might mean generally, but what it might mean with respect to McCarthy and Robinson in particular, two authors whose differences come to look superficial in light of a shared manner of expression that is perhaps as much ontological as it is literary. To read these authors together in such a way, I claim, is to see their similar engagements with matters of scientific inquiry and theological speculation transformed from oppositional to mutually reinforcing; and it is to see their shared attentions to the simultaneously material and immaterial nature of reality as invitations to rethink other apparently stable oppositional categories in their works—categories like science and religion, finitude and infinitude, and even time itself, along with our experience of it. Proceeding with these matters in mind, my dissertation is essentially a twofold study. On the one hand it is a comparison of apparent opposites in the form of an extended reading of the novels and essays of Robinson and McCarthy that illuminates moments of shared purpose where scholarship has assumed there is almost none. Each chapter takes up a single text from Robinson and a single text from McCarthy and sets them side-by-side so as to examine and develop some of the different ways in which the formal features of these works establish similar ontological commitments. On the other hand, the dissertation is also an extended critique of contradiction itself—one which locates in the thematic and ideological tensions between and shared by these two authors an interpretive mode that continually presses against the boundaries of their finite works, and suggests the possibility of a perceptual orientation that is always both “merely” and “greater than.” In each chapter, I find and elaborate upon this interpretive mode, which I draw out of supposed conflicts between the Christian Logos and the evolution of language, the time of Biblical typology and the time of quantum entanglement, and the human experience of loss and the law of the conservation of energy—and use these generative tensions to show how Robinson and McCarthy are ultimately at work on strikingly similar projects.

Ian Gibson (2022). Some Mysterious Resonance Between Thing and Language: On Contradiction and the Materialist Theologies of Cormac McCarthy and Marilynne Robinson. UWSpace. http://hdl.handle.net/10012/18633