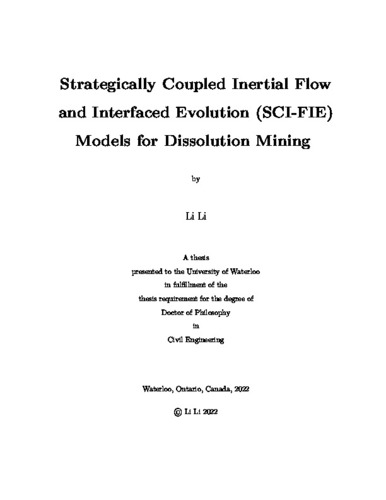 Mineral dissolution or dissolution mining is a technology for underground mineral extraction. The space developed after the mining may be a desirable reservoir for the storage of natural gas and hydrocarbons or compressed air energy storage. The dissolution process involves a slowly moving boundary (solid-fluid interface between the mineral and brine), which must be considered in controlling the shape of the cavity in industrial practice for stable cavern construction. Mineral dissolution is a complex multi-field coupling process that includes dynamic brine flow, dissolved mineral transfer, and solid mineral dissolution. The unavailability of efficient and effective algorithms for the simulation of mineral dissolution, especially on a large scale, is currently one of the significant gaps in the literature. Strategically Coupled Inertial Flow and Interface Evolution (SCI-FIE) models are proposed in the thesis to investigate the dissolution mechanism and provide a tool for more rigorous mineral dissolution and cavern shape control. The models are first built by developing a new loosely coupled algorithm for dissolution and boundary evolution, then improving it by adding gravity effects, and finally developing complex but physics-based model for industrial-scale dissolution simulation. These three objectives have been achieved: (1) developing a tractable numerical model simulation involving free brine flow and physically-driven boundary evolution; (2) developing a numerical model for non-linear mineral dissolution processes with buoyancy effects; and, (3) developing an integrated model for large-scale cavern evolution under turbulent flow. The compressible Navier-Stokes equations are employed to govern the brine flow in SCI-FIE models to achieve objectives (1) and (2) to get more information about the inertial flow. The Reynolds- Averaged Navier-Stokes equations are used to address objective (3) to analyze the turbulent brine flow in industrial-scale cavern development scenarios. The cavity boundary evolution is captured by a sharp interface model with a physically-derived dissolution rate equation. Smoothing algorithms are used to enhance the model robustness, contributing to low computational cost and stable simulation for the longer-term and larger-scale dissolution processes. The models for objectives (1) and (2) are verified through convergence analysis, showing both spatial and temporal convergence. The second model is qualitatively validated using lab-scale experiments. The results of the cavern shape evolution simulation in the models for objective (3) show good agreement with the published experimental work. The models can capture complex flow patterns, such as the generation of vortices (eddies) in the cavity, because the varying density of free brine flow within the cavity and the evolution of the cavity boundary are both considered. The simulation results indicate that the rising plume of less-dense brine results in the “morning glory” shape cavity under a vertical dissolution scenario and a significant difference between upper and lower fronts' dissolution for the horizontal dissolution case. The coupling effect of eddies development and the cavity shape evolution is also discussed. The results demonstrate that irregularities of the cavern wall previously assumed to be exclusively due to mineral heterogeneity, are also, at least in part, attributable to turbulent flow (eddy development). Two competing dissolution mechanisms are identified in the large-scale dissolution process, one enhancing dissolution unevenness and one that smooths out irregular dissolution features on the cavern walls. Different cavern construction methods used in industrial scale dissolution mining were investigated: reverse and direct dissolution methods, which tend towards a ``morning glory” and a ``wide-bottom decanter" shaped cavern, respectively. Results suggest that, because of buoyancy effects, large roof spans seem to be unavoidable without using an oil/air blanket; however, blanket usage tends to lead to more jagged boundaries and can decrease the rate of cavern construction. The model also gives an excellent prediction of cavern evolution in the case of an insoluble interlayer present in the solution mining sequence. This study opens a path to developing robust models of large-scale cavern development. It has implications for similar processes such as leach mining of metal ore deposits or ice melting.