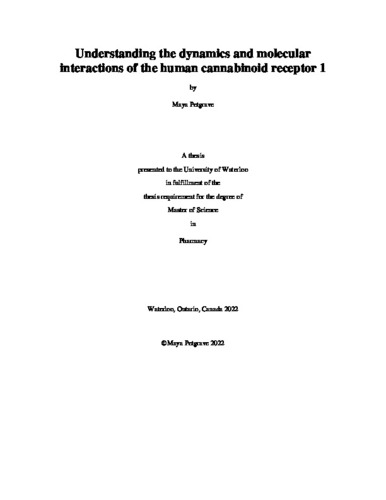 Cannabinoid receptor 1 (CB1), one of the most populated G-protein coupled receptors (GPCR) present within the brain, is involved in various physiological and homeostatic processes. These pathways include metabolism and hunger, locomotion, memory processing, and the onset of psychoactive effects. In recent decades, it has been uncovered that (both endogenous and exogenous) ligands and protein-CB1 interactions can elicit specific cellular pathways via biased intracellular signalling. Biased signalling is commenced by inducing various receptor conformations through protein/ligand-based interactions. These receptor conformations promote CB1 coupling with different G-proteins. Coupling to various G-proteins mediates potential therapeutic or adverse side effects. However, the full details on how CB1 controls these pathways and produces its psychotropic effects (upon cannabis consumption) are not fully understood. Numerous attempts have been conducted to comprehend the CB1 receptor and its signalling mechanism. Unfortunately, due to the complexity and novelty of the field, many knowledge gaps remain. Another prominent issue in the cannabinoid field is the lack of diverse and complete crystallographic structures. To date, the isolation of a complete human crystallographic CB1 structure—free from alterations (i.e., truncations, mutations, and insertion of stabilizing domains) —has not been solved. Moreover, there’s a limited crystallographic database on the reported CB1 interacting proteins, thus further restricting the accuracy of computational studies. For these studies, the ligand-receptor and protein-protein binding interactions and their adopted conformations under the influence of the complete receptor are unknown. These aspects further shroud the cannabinoid field in mystery and limit its clinical utility. However, advancements in crystallographic and computational techniques it has facilitated a novel avenue in the generation of more accurate three-dimensional (3D) computational models and results. This MSc thesis project addressed two major aims – i) developing a comprehensive atomistic model of the human CB1 receptor and investigating its effects on ligand binding, in addition to ii) modelling the interactions of the human CB1 receptor with one of its protein binding partners using computational tools. To investigate the impacts of ligand-CB1 binding interactions, the first complete atomistic model of the human CB1 receptor was built. Three chemically similar ligands were docked to the receptor and subjected to classical molecular dynamic (MD) simulations and binding-free energy calculations. The role of the N-terminus in orthosteric ligand binding was observed and determined for each ligand. These examinations postulated the potential importance of incorporating the complete receptor in computer-aided drug design (CADD) studies. Moreover, the recently published first mammalian cannabinoid interacting protein 1a (CRIP1a) crystallographic structure provided a productive template (~96% identity with that of the human CRIP1a protein) for this study. Construction of the complete activated human CB1 receptor and CRIP1a models’ interactions were investigated utilizing docking approaches. The complexes were subjected to classical MD simulations and binding-free energy calculations that allowed for subsequent ranking of the best complex. Residues involved in the molecular recognition process between human CB1 and CRIP1a were all confined within the experimentally determined binding region, thus validating the model. Overall, this thesis supports previous experimental and computational findings on CRIP1a-CB1 binding interactions and the role of the N-terminus in protein-ligand binding. These results demonstrate the significance of modelling the complete human CB1 receptor to comprehend the protein-protein and protein-ligand interactions within the receptor. Outcomes we can extract from this thesis are i) the entire N-terminal segment is necessary for CADD, docking, and affinity-binding predictions studies. Furthermore, we concluded that ii) the residues involved in the molecular recognition process between that of CRIP1a and CB1 are all within the confines of the experimentally determined regions (residues 34-110 for CRIP1a, and residues within the distal nine amino acids in CB1). Outcomes from this thesis can aid when driving future mutational in vitro studies or designing small molecules to target the CRIP1a-CB1 interface. These small molecules can be significant in the generation of anti-nociceptive therapeutical drugs.