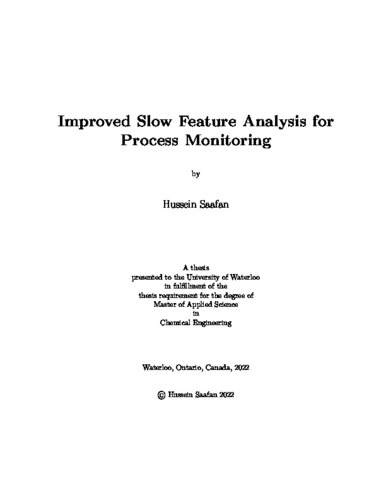 Unsupervised multivariate statistical analysis models are valuable tools for process monitoring and fault diagnosis. Among them, slow feature analysis (SFA) is widely studied and used due to its explicit statistical properties, which aims to extract invariant features of temporally varying signals. This inclusion of dynamics in the model is important when working with process data where new samples are highly correlated to previous ones. However, the existing variations of SFA models cannot exploit increasingly tremendous data volume in modern industries, since they require the data to be fed in as a whole in the training stage. Further, sparsity is also desirable to provide interpretable models and prevent model overfitting. To address the aforementioned issues, a novel algorithm for inducing sparsity in SFA is first introduced, which is referred to as manifold sparse SFA (MSSFA). The non-smooth sparse SFA objective function is optimized using proximal gradient descent and the SFA constraint is fulfilled using manifold optimization. An associated fault detection and diagnosis framework is developed that retains the unsupervised nature of SFA. When compared to SFA, sparse SFA (SSFA), and sparse principal component analysis (SPCA), MSSFA shows superior performance in computational complexity, interpretability, fault detection, and fault diagnosis on the Tennessee Eastman process (TEP) and three-phase flow facility (TPFF) data sets. Furthermore, its sparsity is much improved over SFA and SSFA. Further, to exploit the increasing number of collected samples efficiently, a covariance free incremental SFA (IncSFA) is adapted in this work, which handles massive data efficiently and has a linear feature updating complexity with respect to data dimensionality. The IncSFA based process monitoring scheme is also proposed for anomaly detection. Further, a new incremental MSSFA (IncMSSFA) algorithm is also introduced that is able to use the same monitoring scheme. These two algorithms are compared against recursive SFA (RSFA) which can also process data incrementally. The efficiency of IncSFA-based monitoring is demonstrated with the TEP and TPFF data sets. The inclusion of sparsity in the IncMSSFA method provides superior monitoring performance at the cost of a quadratic complexity in terms of data dimensionality. This complexity is still an improvement over the cubic complexity of RSFA.