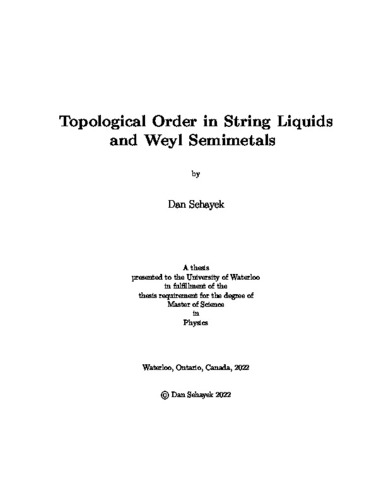 Outside Landau's paradigm of symmetry-breaking orders is the class of topological orders, which cannot be described by a local order parameters. Such orders are generally defined by the presence of a gauge symmetry and possess many interesting features, including fractionalized excitations and topological degeneracy on closed manifolds. The first half of thesis will be dedicated to exploring various techniques for detecting topological order in string liquids, which are spin-1/2 systems with a local $\mathbb{Z}_2$ symmetry. Such a local symmetry gives rise to a loop condensate in the low temperature regime, which allows for emergent fractionalized excitations and topological degeneracy defined by the presence of non-contractible loops. Generally, such phases can be described by the Wegner-Wilson and 't Hooft loop observables, which are non-local string order parameters, and possess a phase transition between perimeter and area laws in spatial dimensions $D\geq{3}$. We will demonstrate the ability of various numerical techniques to detect this $\mathbb{Z}_2$ topological order based on $\sigma^z$ measurements sampled using a Monte Carlo algorithm for the classical $\mathbb{Z}_2$ gauge theory. First, we will show that the diffusion map algorithm can be used to cluster spin configurations according to their topological sector and hence identify the topological degeneracy for the 3-dimensional case. Next, we will show that the first Betti number of geometric complex constructions of spin configurations can be used to measure the prominence of closed loops defined by the local $\mathbb{Z}_2$ symmetry, and that a persistent homology analysis can be used to distinguish loop structures according to their geometry. We will additionally show that both the diffusion map algorithm and the first Betti number of geometric complex constructions can be used to detect the topological phase transition in the Wegner-Wilson loop between perimeter and area laws. The second half of thesis will be dedicated to exploring a construction of $\mathbb{Z}_4$ topological order in Weyl semimetals, which possess topologically protected gapless nodes hosting Weyl fermions and a chiral anomaly response. Such a construction was first proposed by C. Wang, L. Gioia and A. Burkov, and involves superconducting pairing and vortex condensation. We will show that the same $\mathbb{Z}_4$ topological can be obtained from charge density wave (CDW) interactions, which involves applying a similar vortex condensation procedure to 2D Dirac fermions at the interface between the two degenerate CDW ground states at a Weyl node separation of $2Q=\pi$. As in the original construction, fractionalized statistics will emerge in the uncondensed vortices, with odd flux vortices possessing Majorana zero modes and flux $2\pi$ vortices possessing semions. Finally, we will derive the theory of the surface states based on the hydrodynamic BF theory for this $\mathbb{Z}_4$ topological order.