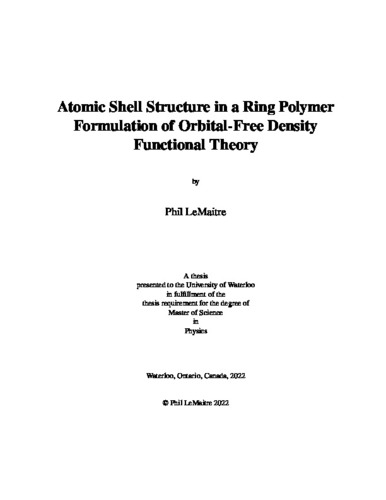 An alternative approach to orbital-free density functional theory based on self-consistent field theory for ring polymers is proposed and applied to isolated atoms on the periodic table in their ground-state. Using a spherical-averaging approximation that groups electrons into periodic table rows, quantitatively accurate atomic binding energies and electronic density profiles are predicted for the first 86 elements as compared to the Hartree-Fock model. The agreement with the binding energies predicted by Hartree-Fock theory is within 10% for the first 86 elements, and within 3% for the first 34 elements. The comparison of electronic density profiles with Hartree-Fock theory for the first 36 elements highlights the shortcomings of the approximation to the Pauli-exclusion field (used to enforce the Pauli-exclusion principle) used in this work in the form of larger than normal peak-to-peak separation, revealing some characteristics that the exact Pauli-exclusion field should have. The density profiles, especially helium and lithium, also provide some legitimacy for the novel electron self-interaction correction introduced in this work. The emergence of atomic shell structure from the postulated pair structure of the model and the spontaneous emergence of spherical symmetry-breaking are also predicted by the model. However, due to the approximation made on the Pauli-exclusion field, the predicted shell structure starts to deviate significantly past the element neon and the symmetry-breaking is predicted to occur at carbon instead of boron. The symmetry-breaking effect is also found to have minimal impact on the binding energies, which suggests that the spherical-averaging approximation is physically reasonable when investigating bulk properties of atomic systems. The pair density contour plots display behaviour similar to polymer macro-phase separation, but still produce the same total electronic density profile that is predicted by quantum mechanics. As well, the framework for general non-orthogonal basis sets within the model is derived and the specific implementation of Gaussian basis sets demonstrate better resolution with significantly less numbers of basis functions than previous iterations; they also do not suffer from finite-size effects. The Gaussians do however introduce an auxiliary problem of choosing the proper basis set exponents to span the space, which can prevent convergence to the infinite basis set limit. Finally, some future extensions for the model are discussed, where the implementation of these extensions is detailed and brief commentary on their implications is given.