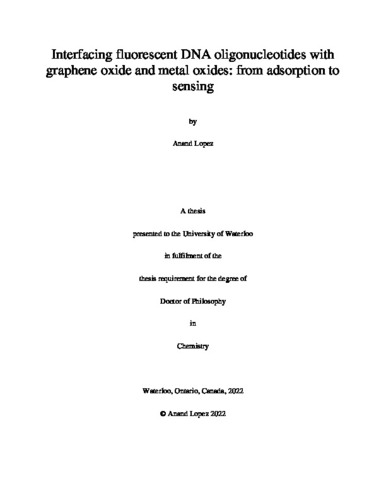 DNA, apart from being the mode of genomic information storage, has found several uses in catalysis (DNAzymes) and target detection (aptamers). Developing novel biosensors utilizing these properties has therefore been a significant avenue for research in recent decades. Of these avenues, interfacing fluorescent dye-labelled DNA with various nanomaterials has birthed many sensors which have been implemented in several environments such as lake water, food, and even within the cell. In this thesis, we provide an improved understanding of DNA adsorption on such nanomaterials and interpretation of sensor results. In Chapter 1, background information related to DNA, fluorescence and nanomaterials are introduced, with associated examples of different biosensor design. The fundamental questions arising from these sensor designs are also stated, along with thesis objectives. In Chapter 2, a comparison is made between graphene oxide and inorganic metal oxides for aptamer-based fluorescence sensing. It was found that, for graphene oxide, target/aptamer interactions dominate the sensor response. This is in contrast to the metal oxide nanoparticles, where sensing is achieved through the target simply displacing DNA from the nanomaterial surface. In Chapter 3, the properties of carboxyfluorescein-labelled poly-C DNA are explored in detail. Through fluorescence and circular dichroism experiments, it was seen that carboxyfluorescein stabilizes i-motif formation in poly-C DNA, even at neutral pH. This folding was irreversible upon heating. Unfolding of the structure led to improved adsorption on GO demonstrated through fluorescence desorption experiments. In Chapter 4, the anomalously high affinity of poly-C adsorption was investigated using both fluorescence experiments and simulations. It was found that the arrangement of cytosines within the chain did not affect affinity, merely their total number. Through simulations, it was determined that poly-C DNA spreads out on the GO surface due to its lack of intrastrand interactions. This results in more phosphate-backbone hydrogen bond sites and a more favourable bond. At lower pH, i-motif formation drastically reduces poly-C affinity to GO; intrastrand interactions dominate over GO/DNA binding. In Chapter 5, fluorescence polarization was used to characterize labelled DNA interactions with various nanomaterials. First, it was determined that, at low labelled-DNA concentrations, polarization is artificially increased by scattering of incident polarized light. Polarization is also increased with the addition of GO to this DNA. Through a simple mathematical derivation, it was shown that the increase in polarization with this kind of surface was due to low concentration of free DNA, rather than adsorption to the GO surface. This was compared to a low-quenching surface (Yttrium oxide), in which the total polarization observed was dominated by the binding DNA rather than free DNA. Overall, the work presented in this thesis improves the current understanding of both fundamental DNA/nanomaterial interactions, as well as its implementation in fluorescence-based sensor designs. Future biosensor construction can incorporate these concepts for better sensitivity, specificity and signal interpretation.