Tracial and ideal structure of crossed products and related constructions 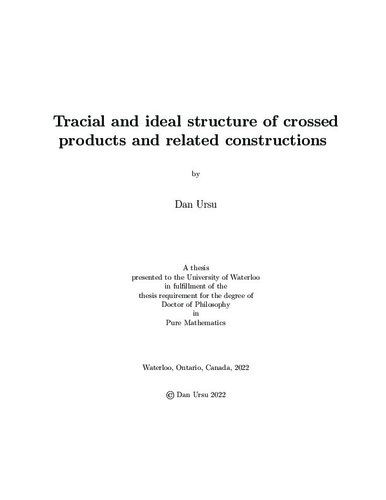 In this thesis, we concern ourselves with asking questions about the basic structure of group C*-algebras, crossed products, and groupoid C*-algebras. Specifically, we are concerned with two main topics. One is the simplicity of these algebras, and we either extend work that was already done in the case of group C*-algebras and crossed products, or characterize simplicity altogether in the case of groupoid C*-algebras. The other is the structure of traces on these algebras, in particular in the case of crossed products. In the third chapter, we give complete descriptions of the tracial states on both the universal and reduced crossed products of a C*-dynamical system consisting of a unital C*-algebra A and a discrete group G. In particular, we also answer the question of when the tracial states on the crossed products are in canonical bijection with the G-invariant tracial states on A. This generalizes the unique trace property for discrete groups. The analysis simplifies greatly in various cases, for example when the conjugacy classes of the original group G are all finite, and in other cases gives previously known results, for example when the original C*-algebra A is commutative. We also obtain results and examples in the case of abelian groups that contradict existing results in the literature of Bédos and Thomsen. Specifically, we give a finite-dimensional counterexample, and provide a correction to the result of Thomsen. The fourth chapter is a short note on results in the von Neumann crossed product case that were never submitted for publication, and the author suspects might potentially be folklore, but cannot actually find anywhere. We extend the results on C*-crossed products from the third chapter to the case of von Neumann crossed products. In particular, we obtain results that characterize when a G-invariant normal tracial state on M has a unique normal tracial extension to the crossed product. As a consequence, we also characterize when such crossed products are finite factors. In the fifth chapter, we consider the notion of a plump subgroup that was recently introduced by Amrutam. This is a relativized version of Powers' averaging property, and it is known that Powers' averaging property for G is equivalent to C*-simplicity. With this in mind, we introduce a relativized notion of C*-simplicity, and show that for normal subgroups it is equivalent to plumpness, along with several other characterizations. For the sixth chapter, we prove a generalized version of Powers' averaging property that characterizes simplicity of reduced crossed products of a commutative unital C*-algebra C(X) and a discrete group G. As a consequence, we generalize results of Hartman and Kalantar on unique stationarity to the state space of the crossed product and to Kawabe's generalized space of amenable subgroups. This further lets us generalize a result of the first coauthor of the original publication of this chapter and Kalantar on simplicity of intermediate C*-algebras. For the seventh chapter, we characterise, in several complementary ways, étale groupoids with locally compact Hausdorff space of units whose essential groupoid C*-algebra has the ideal intersection property, assuming that the groupoid is either Hausdorff or sigma-compact. This leads directly to a characterisation of the simplicity of this C*-algebra which, for Hausdorff groupoids, agrees with the reduced groupoid C*-algebra. Specifically, we prove that the ideal intersection property is equivalent to the absence of essentially confined amenable sections of isotropy groups. For groupoids with compact space of units we moreover show that this is equivalent to the uniqueness of equivariant pseudo-expectations. A key technical idea underlying our results is a new notion of groupoid action on C*-algebras including the essential groupoid C*-algebra itself. For minimal groupoids, we further obtain a relative version of Powers averaging property. Examples arise from suitable group representations into simple groupoid C*-algebras. This is illustrated by the example of the quasi-regular representation of Thompson's group T with respect to Thompson's group F, which satisfies the relative Powers averaging property in the Cuntz algebra O2.