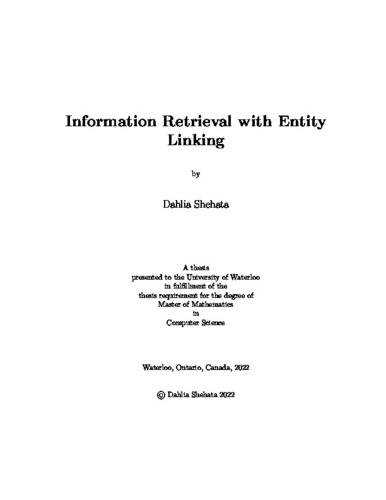 Despite the advantages of their low-resource settings, traditional sparse retrievers depend on exact matching approaches between high-dimensional bag-of-words (BoW) representations of both the queries and the collection. As a result, retrieval performance is restricted by semantic discrepancies and vocabulary gaps. On the other hand, transformer-based dense retrievers introduce significant improvements in information retrieval tasks by exploiting low-dimensional contextualized representations of the corpus. While dense retrievers are known for their relative effectiveness, they suffer from lower efficiency and lack of generalization issues, when compared to sparse retrievers. For a lightweight retrieval task, high computational resources and time consumption are major barriers encouraging the renunciation of dense models despite potential gains. In this work, I propose boosting the performance of sparse retrievers by expanding both the queries and the documents with linked entities in two formats for the entity names: 1) explicit and 2) hashed. A zero-shot end-to-end dense entity linking system is employed for entity recognition and disambiguation to augment the corpus. By leveraging the advanced entity linking methods, I believe that the effectiveness gap between sparse and dense retrievers can be narrowed. Experiments are conducted on the MS MARCO passage dataset using the original qrel set, the re-ranked qrels favoured by MonoT5 and the latter set further re-ranked by DuoT5. Since I am concerned with the early stage retrieval in cascaded ranking architectures of large information retrieval systems, the results are evaluated using recall@1000. The suggested approach is also capable of retrieving documents for query subsets judged to be particularly difficult in prior work. In addition, it is demonstrated that the non-expanded and the expanded runs with both explicit and hashed entities retrieve complementary results. Consequently, run combination methods such as run fusion and classifier selection are experimented to maximize the benefits of entity linking. Due to the success of entity methods for sparse retrieval, the proposed approach is also tested on dense retrievers. The corresponding results are reported in MRR@10.