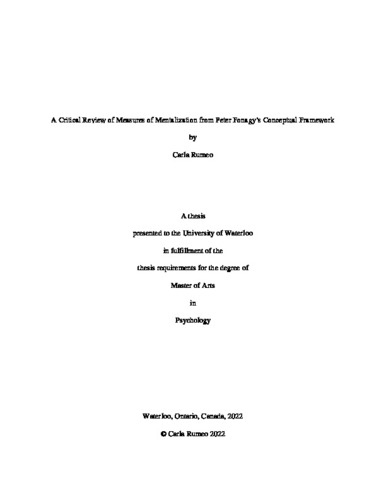 Background: Mentalization is an expansive and multifaceted construct with important implications for psychological research as well as the etiology and treatment of psychological disorders. It is defined as the process through which an individual infers their own and others’ mental states are intentional and lead to meaningful actions (Bateman & Fonagy, 2004). The theoretical framework in which mentalization is situated has evolved over the years and is widely accepted however, the empirical work surrounding the measurement and operationalization of mentalization is not as well developed and merits further investigation. Methods: The authors examined the psychometric soundness and construct validity of the gold standard, interview-based measure of mentalizing as well as five self-report scales. To assess the convergent validity of these measures, Canadian university students (N = 247) completed three self-report measures of mentalization as well as one task-based tool, the Movie for the Assessment of Social Cognition (MASC; Dziobek et al., 2006). To investigate whether self-report measures predict performance on the MASC, twenty linear regressions were estimated. Exploratory factor analysis was conducted to identify the common latent factors underlying all five self-report measures at the subscale level. Results: Certain self-report measures were strongly linked and common content included items about emotion recognition and regulation, understanding one’s motivations for their behaviors and making accurate inferences about others’ thoughts. Other measures were weakly correlated and dissimilar in item content. All self-report measures were weakly correlated with the MASC. Most of the regression models were non-significant. Of the four models that emerged as significant and had significant direct effects, a classical suppression effect was observed, which merits replication. Exploratory factor analysis revealed a one factor solution fit the subscale level data well. Conclusions: This study provides preliminary evidence that there is some convergence among self-report measures. Researchers should reflect on their choice of instrument and should not use different tools interchangeably. The lack of convergence between task-based and self-report measures is disconcerting and warrants further research in this area. Last, whether the latent construct of mentalization is indeed unidimensional or has a more complex factor structure is yet to be determined.