Worth the Effort? The Effects of Task-Centrality, Annoyance, and Arrogance on Manager Effort Allocation During Feedback-Seeking Episodes 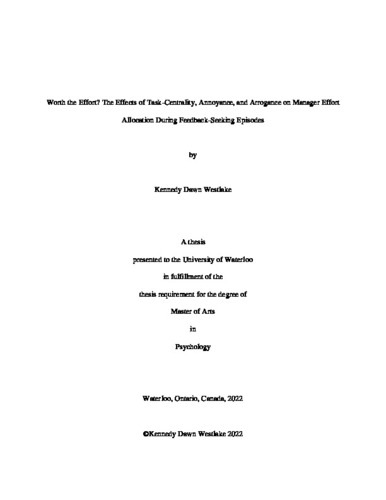 Employees seek feedback from managers to reduce work-related ambiguity. However, managers typically have other competing demands on their time, and as such, may not allocate sufficient effort to providing feedback. To this end, the purpose of the current study is to investigate the feedback-seeking process from the manager’s perspective. Specifically, we draw on self-regulatory theories to explain how managers balance providing feedback with other work demands. We predicted that the perception of providing feedback as a central task in one’s role as a manager would be positively related to effort allocated to delivering feedback. Furthermore, we expected annoyance to mediate this relationship. However, we did not expect the effect of task centrality on annoyance to be uniform across all managers. Instead, we predicted the relationship between task centrality and annoyance would be strongest for managers who are highly arrogant, relative to their less arrogant counterparts. We tested our predictions using a multi-wave, correlational study. Managers (N=187) reflected on a recent feedback episode, and completed self-report measures of annoyance, arrogance, task centrality, and effort. As predicted, there was a significant positive relationship between task centrality and effort. Additionally, annoyance mediated task centrality and effort. Although the focal analyses did not support arrogance as a moderator for task centrality and annoyance, supplemental analyses revealed that arrogance was associated with less effort allocated to delivering feedback, and that this effect was mediated by task centrality perceptions. The theoretical and practical implications of our findings as well as future research directions will be discussed.

Kennedy Westlake (2022). Worth the Effort? The Effects of Task-Centrality, Annoyance, and Arrogance on Manager Effort Allocation During Feedback-Seeking Episodes. UWSpace. http://hdl.handle.net/10012/18538