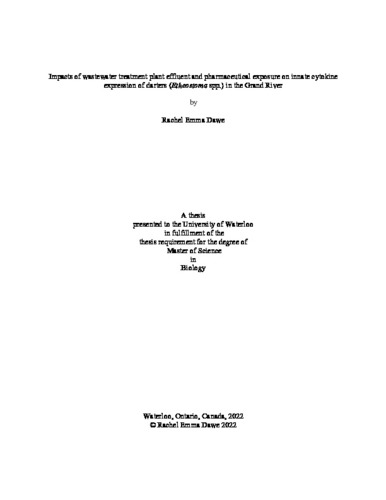 Aquatic organisms, such as fish, are in constant contact with various stressors and antigenic material present within their environments. The impact of stressors associated with wastewater-exposed environments on native fish species has become of particular interest in toxicology studies. The objectives of this thesis were to examine the effects of stressors associated with wastewater treatment plant (WWTP) effluents on innate cytokine expression within the gills of darter species (Etheostoma spp.), using both field and laboratory approaches. Male and female darters (rainbow, greenside, fantail, and johnny darters) were collected upstream and downstream of the Waterloo WWTP in the Grand River, ON. Gill samples were collected from fish in the field and from a second subset of fish brought back to the laboratory. Laboratory fish were acutely exposed (96-hours) to an environmentally relevant concentration of a commonly prescribed antidepressant, venlafaxine (1.0 µg/L). To assess the impacts of effluent and venlafaxine exposure on the innate immune response of darters, the expression of key innate cytokines was examined. No significant effects on innate cytokine expression were observed within the gills between upstream and downstream sampled fish. Moderate effects on cytokine expression were observed in fish exposed to 1.0 µg/L of venlafaxine compared to their control counterparts however, changes were not indicative of a biologically significant immune response occurring because of the exposure. Although the results of this thesis did not display major impacts of effluent and pharmaceutical exposure on the expression of innate cytokines within the gills, they provide a novel avenue of study, illustrating the importance of examining the potential impact that wastewater-associated stressors can have on fundamental immune responses of native fish species.