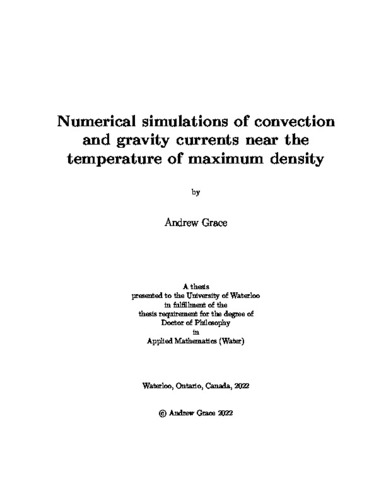 Recently, the dynamics of flows in cold freshwater (temperatures around the temperature of maximum density, 3.98 oC) has garnered much interest in the environmental fluid dynamics community. From a dynamical perspective, fluid flow in cold freshwater is interesting due to the non-linear relationship between temperature and density, as well as the relatively slow current speeds. In this thesis, we have presented a series of numerical process studies with the goal of capturing, understanding, and describing characteristic dynamics of different temperature intervals of the freshwater non-linear equation of state (NLEOS), quantified by a parameter called the NLEOS parameter Theta. We use two canonical examples of density driven phenomena to describe the dynamics of cold water; convection and gravity currents. This thesis begins by providing some general background and context on studies in cold freshwater, and provide some discussion on some technical background and the numerical model. An important interval of the NLEOS is the region between the freshwater freezing point and the temperature maximum density. Over this interval, adding heat to the system increases the water density. In chapter 3, we present a series of numerical process studies of a freshwater system where a volumetric heating source (representing incident solar radiation) preferentially adds heat near the surface of a body of cold freshwater in the presence of a stable background shear current. The heating source induces small and nearly linear temperature and density changes within the flow, leading to an unstable density profile, resulting in convective plumes. The results of this chapter show that for a sufficiently strong shear current, the growth phase of the thermally induced instabilities is nearly two dimensional and that the transition to more vigorous three dimensional motion is initialized by baroclinic production of vorticity by convective instabilities followed by a rapid increase in streamwise vorticity generated by vortex tilting and stretching. We describe how this process is modified by differences in shear strength and thermal forcing attenuation length. In chapter 4, we present a series of simulations of gravity currents designed to isolate the effects of a monotonically increasing but non-linear interval of the NLEOS. In this chapter, we compare the evolution of gravity currents that are lighter than the ambient to those that are heavier than the ambient (while holding the magnitude of the density and temperature differences equal across all cases). The results of this chapter show that for intrusions initially cooler than the ambient, the density difference between the intrusion and the ambient decreases rapidly, while for intrusions initially warmer than the ambient, the density difference decreases at a slower rate. The differing rates at which the density difference decreases lead to asymmetries in head location, and vertical extent of intruding fluid, and may have implications for larger scale flows in this temperature regime. These results are robust across Grashof numbers studied. In chapter 5 we present a series of simulations of gravity currents where ambient and intruding temperatures are on opposite sides of the temperature of maximum density. We use these simulations to describe how cabbeling (mixing of parcels of fluid that lead to a parcel of fluid that is denser) affects the evolution of gravity currents. We show that initially buoyant currents undergo mixing in the body and tail region of the gravity current, which generates dense water from cabbeling. The dense water sinks and forms a secondary current along the bottom of the domain that is much larger in scale than the original buoyant current. In this chapter, we show that the maximum distance that the initial current progresses is a non-linear function of Theta and the depth of the domain. Lastly, we discuss some general characteristics of the emergent current that forms along the bottom. We highlight that once the bottom current forms, larger values of Theta lead to a larger spatial extent of the current but narrower distributions of density and temperature about their mean values. Finally, chapter 6 provides a brief summary and a look towards potential future work related to the contents of this thesis.