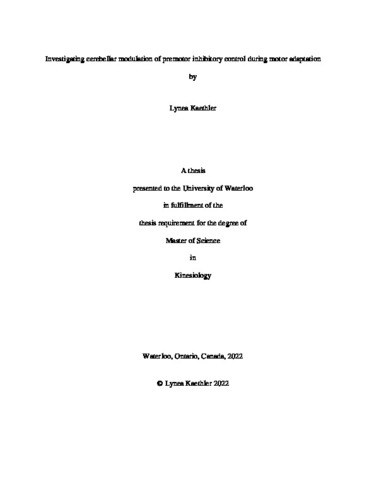 Motor adaptation is marked by neurophysiological changes in the motor cortex; however, other regions of the motor network such as the cerebellum and premotor cortex also contribute to this process. Enhancing cerebellar activity has been shown to increase the rate of motor adaptation (Galea et al., 2011; Koch et al., 2020), though it is unclear which neurophysiological mechanisms contributing to adaptation are influenced by the cerebellum. Pre-movement beta event-related desynchronization (ß-ERD), which reflects a release of synchronized inhibitory control in the premotor cortex during movement planning, is one mechanism which may be modulated by the cerebellum through cerebellar-premotor cortical connections (Tzvi et al., 2020). I hypothesized that enhancing cerebellar activity with intermittent theta burst stimulation (iTBS) would improve participants’ adaptation rate, increase ß-ERD during motor adaptation, and that there would be a relationship between the task performance and the ß-ERD. Thirty-four participants were assigned to receive either active (A-iTBS) or sham cerebellar iTBS (S-iTBS). In the first study session participants completed a brief practice session on a visuomotor rotation task, with no rotation, to familiarize them with the task timing and joystick control of the cursor. Following practice, participants received active or sham iTBS. After ten minutes they completed training on the task, with a 45º rotation to the cursor movement. Participants returned to the lab 24 hours later for session 2, to perform the task again to get a measure for how much of the learned rotation had been retained. Angular error at peak velocity was the primary behavioural measure, which was the angular difference between the ideal trajectory of the cursor and the actual trajectory of the cursor at peak velocity in the movement. The primary neurophysiological measure was ß-ERD, the change in power in the ß band from rest to movement planning and was measured using electroencephalography (EEG). Results show a greater adaptation rate following active cerebellar iTBS, and an increase in ß-ERD compared to sham cerebellar iTBS. The divergence in ß-ERD change between groups is indicative of a cerebellar modulation of the motor cortical inhibitory control network. Interestingly, the enhanced release of inhibitory activity was not just present during the initial adaptation phase of training as predicted, but overall persisted across training. This finding may suggest that the effects of iTBS and the cerebellar influence on the premotor cortex were not specific to the adaptation period but persist through the entire training session. There was no difference between groups in the amount of the skill which was acquired during training or the amount of the skill which was retained between session 1 and session 2. Results from this study further our understanding of the connections between the cerebellum and the motor cortex as they relate to acquiring motor skills, as well as inform future skill training and rehabilitation protocols.