On Amenability Properties and Coideals of Quantum Groups 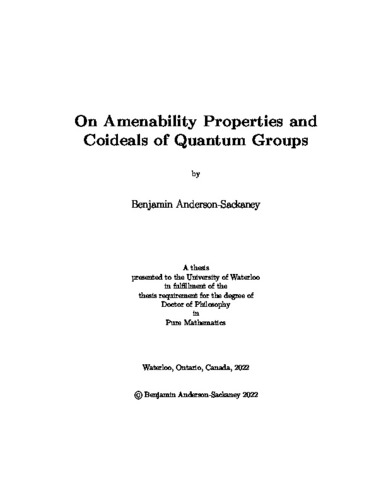 We study amenability type properties of locally compact quantum groups and subobjects of quantum groups realized as submodules of their von Neumann algebras. An important class of such subobjects are the coideals, which offer a way of defining a “quasisubgroup” for locally compact quantum groups. Chapters 3, 4, and 5 are based on [3], [2], and [4] respectively. In Chapter 3, we establish the notion of a non-commutative hull of a left ideal of L1(Gb) for a discrete quantum group G. Non-commutative spectral synthesis is defined too, and is related to a certain Ditkin’s property at infinity, allowing for a description of the closed left ideals of L1(Gb) for many known compact quantum groups Gb from the literature. We apply this work to study weak∗ closed in ideals in the quantum measure algebra of coamenable compact quantum groups and certain closed ideals in L1(Gb) which admit bounded right approximate identities in relation to coamenability of Gb (Theorem 3.3.14). In Chapter 4, we study relative amenability and amenability of coideals of a discrete quantum group, and coamenability of coideals of a compact quantum group. Making progress towards answering a coideal version of a question of [65], we prove a duality result that generalizes Tomatsu’s theorem [122] (lemmas 4.4.14 and 4.1.9). Consequently, we characterize the reduced central idempotent states of a compact quantum group (Corollary 4.1.2). In Chapter 5, we study tracial and G-invariant states of discrete quantum groups. A key result here is that tracial idempotent states are equivalently G-invariant idempotent states (Proposition 5.3.12). A consequence is the resolution of an open problem in [96, 22] in the discrete case, namely that amenability of G is equivalent to nuclearity of and the existence of a tracial state on Cr(Gb) (Corollary 5.3.14). We also obtain that simplicity of Cr(Gb) implies no G-invariant states exist (Corollary 5.3.15). Finally, we prove existence and uniqueness results of traces in terms of the cokernel, HF , of the Furstenberg boundary and the canonical Kac quotient of Gb. In Chapter 6, we develop a notion of operator amenability and operator biflatness of the action of a completely contractive Banach algebra on another completely contractive Banach algebra. We study these concept on various actions defined for locally compact quantum groups and their quantum subgroups, and relate them to usual operator amenability and other related properties, including amenability, coamenability, and compactness.