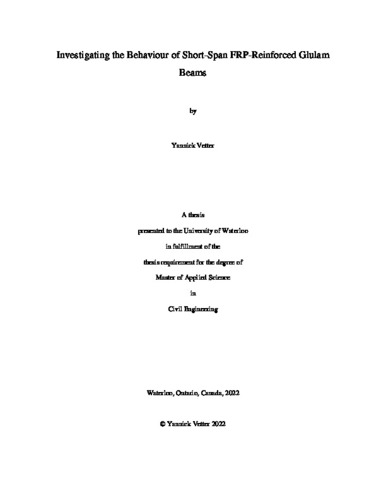 The broader availability of engineered wood products has generated a resurgence of wood used as a construction material over the past few decades. To further promote the use of timber, a solution aimed at increasing the structural capacity of aging or deficient members must be developed. The use of externally bonded fibre reinforced polymer (FRP) sheets has been the subject of various studies that have produced encouraging results. This study was conducted to determine the effects of the reinforcement quantity and orientation on the flexural response of short-span FRR-reinforced glulam beams. Special consideration was given to the depth-to-span ratio and the effect of partially and fully confined reinforcement configurations on the observed failure modes. A total of thirty glulam beams were tested under four-point loading with the load at failure, midspan deflection, strain distribution and failure mode being recorded and used to quantify the effect of the reinforcement. In addition to the experimental program, a non-linear model was developed to predict the flexural resistance of unreinforced and reinforced beams. Individual component testing was performed to determine the characteristic strengths of the materials needed as input for the model. Results for the simple tension and U-shaped reinforced glulam beams demonstrated increases in resistance and stiffness compared to the control specimens; however, the combination of the span-to depth ratio and insufficient development length caused shear failures. The undesired failure mode was addressed through the use of transversely applied FRP sheets. The addition of FRP hoops located in the shear regions of the bending member helped increase the resistance by factors ranging up to 1.17 and contained the failure to allow for some post-peak resistance. FRP sheets providing tension reinforcement at the midspan and confinement in the shear spans were also investigated as means of partially confined beams aimed at addressing the question of retrofitting members that have accessibility issues and has shown to prevent undesirable failure modes while also providing some level of post-peak resistance compared to conventional retrofitting schemes. Fully confined beams were also the subject of this investigation to better understand the effect of the quantity of reinforcement and to use a comparison to unconfined beams. The effect of beam depth was considered by replicating certain reinforcement configurations on larger cross-sectional beams, with results demonstrating consistent results. The material model used to generate the resistance curves was shown to generate a model to experimental strength value ratio of 0.92.