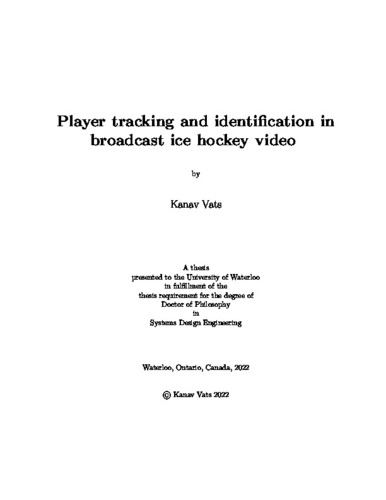 Tracking and identifying players is a fundamental step in computer vision-based ice hockey analytics. The data generated by tracking is used in many other downstream tasks, such as game event detection and game strategy analysis. Player tracking and identification is a challenging problem since the motion of players in hockey is fast-paced and non-linear when compared to pedestrians. There is also significant player-player and player-board occlusion, camera panning and zooming in hockey broadcast video. Identifying players in ice hockey is a difficult task since the players of the same team appear almost identical, with the jersey number the only consistent discriminating factor between players. In this thesis, an automated system to track and identify players in broadcast NHL hockey videos is introduced. The system is composed of player tracking, team identification and player identification models. In addition, the game roster and player shift data is incorporated to further increase the accuracy of player identification in the overall system. Due to the absence of publicly available datasets, new datasets for player tracking, team identification and player identification in ice-hockey are also introduced. Remarking that there is a lack of publicly available research for tracking ice hockey players making use of recent advancements in deep learning, we test five state-of-the-art tracking algorithms on an ice-hockey dataset and analyze the performance and failure cases. We introduce a multi-task loss based network to identify player jersey numbers from static images. The network uses multi-task learning to simultaneously predict and learn from two different representations of a player jersey number. Through various experiments and ablation studies it was demonstrated that the multi-task learning based network performed better than the constituent single-task settings. We incorporate the temporal dimension into account for jersey number identification by inferring jersey number from sequences of player images - called player tracklets. To do so, we tested two popular deep temporal networks (1) Temporal 1D convolutional neural network (CNN) and (2) Transformer network. The network trained using the multi-task loss served as a backbone for these two networks. In addition, we also introduce a weakly-supervised learning strategy to improve training speed and convergence for the transformer network. Experimental results demonstrate that the proposed networks outperform the state-of-the art. Finally, we describe in detail how the player tracking and identification models are put together to form the holistic pipeline starting from raw broadcast NHL video to obtain uniquely identified player tracklets. The process of incorporating the game roster and player shifts to improve player identification is explained. An overall accuracy of 88% is obtained on the test set. An off-the-shelf automatic homography registration model and a puck localization model are also incorporated into the pipeline to obtain the tracks of both player and puck on the ice rink.