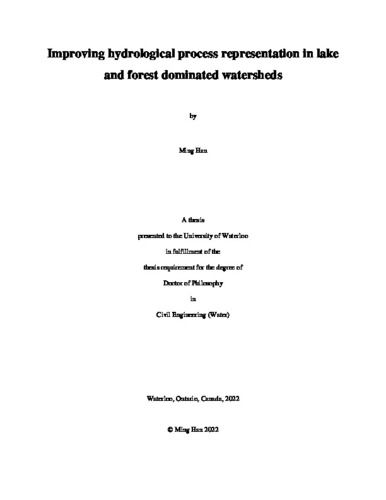 Hydrological models are simplified representations of the natural surface water dynamic system. This thesis focuses on improving these representations to make them more realistic and thus more appropriate tools to simulate past and future hydrological behaviors. The two specific hydrological model structural improvements in this thesis focus on the explicit representation of 1) lake representation in complex lake networks and 2) forest growth/disturbance representation in forest headwater catchments. The first and primary focus of this research is on lake (and reservoir) delineation and subsequent simulation in hydrological models. Lakes and reservoirs have critical impacts on hydrological, biogeochemical, and ecological processes, and they should be an essential component of hydrological and eco-hydrological watershed modelling. Past large-scale hydrological modelling efforts tend to either ignore the impacts of all lakes or explicitly simulate the behavior of only the largest lakes in a watershed. This is practically due to two reasons. First, the difficulties inherent in representing thousands of lakes in various hydrological models. Second, the model without representing lakes can typically provide reasonable streamflow simulation at the watershed outlet. However, the potential impacts of ignoring lakes on the simulated runoff components (i.e., quick runoff, baseflow, infiltration, eta) and streamflow at internal gauges have not been adequately studied. A suite of Pan-Canadian subwatershed-based lake and river routing GIS products at multiple spatial resolutions has been developed. These are the first routing networks available that explicitly and in a hydrologically consistent way represent lakes for the domain of Canada. The routing networks provide the necessary routing network topology and network attributes to enable vector-based hydrological routing anywhere in Canada. A case study using the Raven hydrological modelling framework to simulate routing from the Hudson Bay watershed shows that eliminating lakes can have a significant detrimental impact on hydrograph quality for some gauge locations and that excluding lakes from large-scale simulations degrades hydrograph quality in lake-dominated watersheds. Results demonstrated the need for a flexible and generic watershed delineation toolbox capable of flexible levels of lake delineation. An open-source GIS toolbox (BasinMaker) was developed that can automatically and efficiently build vector-based hydrological lake-river routing networks, including flexible discretization choices to represent an arbitrary number of lakes within a watershed. BasinMaker was used to delineate the North American Lake-River Routing Product v2.1 (available at http://hydrology.uwaterloo.ca/basinmaker/index.html) and the Ontario Lake-River Routing Product v1 (available at https://lake-river-routing-products-uwaterloo.hub.arcgis.com). Two novel post-processing functions in BasinMaker are ideal customization tools that can simplify the high-resolution large-scale routing networks already delineated by Basin Maker in the above two routing products. The impacts of ignoring lakes on the simulated runoff components and model performance at internal watershed gauges was investigated by comparing the semi-distributed hydrological model simulation results from two model structures (with and without lakes) for two lake-dominated Northern Ontario watersheds. The larger 4120 km2 case study watershed model with lakes simulated 316 lakes while the smaller 10 km2 case study watershed model with lakes simulated 8 lakes. Because of the model compensation behavior, ignoring lakes in the model has significant impacts on the simulated runoff components, which will reduce the quick runoff, increase the infiltration, and increase the baseflow from the soil storage, all relative to the equivalent model that explicitly simulate lakes. Ignoring lakes in a hydrological model will also decrease the model’s flexibility/uncertainty in the simulated runoff components in each flow pathway. The second focus area of the thesis is on forest growth/disturbance modelling. Understanding the impact of disturbance on the eco-hydrological processes in forest headwaters is essential for forest management. Eco-hydrological models are a powerful tool often used to quantify the response of forested catchments to a forest disturbance. However, the forest growth modules in commonly applied eco-hydrological models such as RHESSys and SWAT do not support simulating the forest density, diameter at breast height (DBH), and basal area changes, which is critical for forest describing and assessing management activities, such as forest harvesting and reforestation. Moreover, the vegetation growth modules of eco-hydrological models are typically not modular. Thus, it is difficult for researchers to implement these vegetation growth modules into a different hydrological model, most of which treat vegetation growth in a very rudimentary and indirect fashion. A vegetation growth library framework (Robin) was developed, which can be easily coupled to any hydrological or land-surface model to add the functionality of crop and vegetation growth functionality. Moreover, a new daily version of the popular 3PG (Physical Processes Predicting Growth) forest growth model, which has been widely used in modelling forest dynamics, was emulated in the Robin vegetation growth library (Robin_3PG). Robin_3PG has been successfully compiled with the Raven Hydrological Modelling Framework (Craig et al. 2020) and then used to build coupled forest growth and hydrological models (Raven_Robin_3PG). The coupled model (Raven_Robin_3PG) was applied to a paired-catchment forest harvesting experiment conducted at the extensively-monitored Turkey Lakes Watershed located north of Sault Ste. Marie, Ontario, Canada. The model reasonably simulates the hydrological processes' response to the forest harvest management and the forest’s growth and regrowth in the control and forest harvest catchments. Moreover, the coupled model could simulate the response of the two hydrological signatures (annual runoff ratio and Budyko framework) to forest harvest management. In comparison, the model without coupling the Robin_3PG is unable to simulate these observed responses. The climate inputs and the evapotranspiration process significantly impact the response of the runoff components to the forest disturbance.