Exploring the Tourism Development Trajectory in a Post-colonial Region Through the Lens of Evolutionary Economic Geography: The Case of Central Region of Ghana 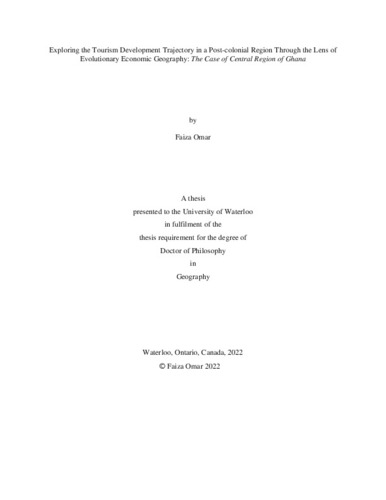 Over the past decade, geographers have used an evolutionary approach to understand how path-dependent resource communities in the global north diversify by adding new tourism trajectories (e.g. Brouder, 2017; Mitchell and Shannon, 2018a, b). At the same time, geographers have documented the growing involvement of in-migrants (including counterurbanites and returnees) in the tourism industry of transitioning regions. This study combines these two foci to analyze the involvement of in-migrants (and others) in tourism trajectory development in one region of the global south: Central Region of Ghana, West Africa. The research is guided by five objectives, which are: 1) to describe the changing functionality of the three major tourist destinations in the Central Region of Ghana; 2) to identify who is involved in tourism trajectory development and to assess the nature of their involvement; 3) to uncover the types of mechanisms (recombination, layering, or conversion), heritage (colonial and non-colonial), and heritage products (artefactual, crafted, replica and/or symbolic) used by in-migrants and other stakeholders in tourism trajectory development; 4) to determine the direct and indirect impacts of this development in select tourist communities; and, 5) to identify perceived deficiencies in the tourism trajectory of these areas, and potential remedies for addressing these deficiencies. To meet these objectives, key informant interviews were conducted with tourism and community stakeholders. Questionnaires were distributed to tourism proprietors, and interviews were conducted with these entrepreneurs at three major tourist areas in the region: those focused on Cape Coast Castle, Elmina Castle, and the Kakum National Park. The study is guided by a critical realist ontology, which recommends three stages in the research process (demi-regularity identification, abduction and retroduction; Fletcher, 2017). The findings reveal that Central Region of Ghana is a path-dependent productivist economy; however, also present are diversified activities that resemble those of post-productivist regions, particularly seen in developed countries (Geyer and Geyer, 2017) including Canada (Mitchell and Shannon, 2018a). While the region continues to rely on the primary sector activities of fishing, farming, mining, and forestry, tourism contributes significantly to its economic diversity. This industry arose from public (government) and civic (not-for profit) initiatives that were introduced as a result of economic decline in the 1980s. The industry initially capitalized on the region’s natural heritage (Kakum forest) and cultural heritage assets (forts and castles), which had been developed by Europeans over a 400-year period to facilitate the Trans-Atlantic slave trade. Later, private sector entrepreneurs (most with external living experience) used their capital assets (social, financial, human, and physical) to enhance the tourism pathway through their activities of recombination, layering, and conversion in the tour, accommodation, food, and retail sectors. In-migrants, particularly counterurbanites, have been found to play a key role in diversifying the tourism trajectory and contributing to neo-endogenous development in the region. The impact of their activities is evident in increased visitation and capacity building. Despite these impacts, some deficiencies (e.g. limited diversification) are identified, which are traced to several local liabilities (i.e. tourism’ low income potential, limited tourism asset knowledge, and unwillingness of locals to engage in state initiatives). The study concludes that these liabilities must be overcome before additional layering and conversion mechanisms can be applied to renew and extend the region’s tourism trajectory. This study contributes to the evolutionary economic geography, tourism and migration literature and provides a new heritage tourism development framework that is applicable in a post-colonial African region and in any context where the conditions for tourism development are present. It also contributes to our understanding of socio-economic development in the Central Region and the role of the tourism development trajectory in the region’s economy.

Faiza Omar (2022). Exploring the Tourism Development Trajectory in a Post-colonial Region Through the Lens of Evolutionary Economic Geography: The Case of Central Region of Ghana. UWSpace. http://hdl.handle.net/10012/18437