Brands of cumulants in non-commutative probability, and relations between them 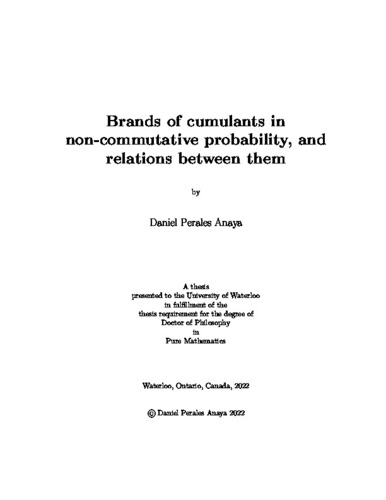 The study of non-commutative probability revolves around the different notions of independeces, such as free, Boolean and monotone. To each type of independence one can associate a notion of cumulants that linearize the addition of independent random variables. These notions of cumulants are a clear analogue of classic cumulants that linearize the addition of independent random variables. The family of set partitions P plays a key role in the combinatorial study of probability because several formulas relating moments to a brand of cumulants can be expressed as a sum indexed by set partitions. An intriguing fact observed in the recent research literature was that non-commutative cumulants sometimes have applications to other areas of non-commutative probability than the one they were designed for. Thus one wonders if there are nice combinatorial formulas to directly transition from one brand of cumulants to another. This thesis is concerned with the study of interrelations between different brands of cumulants associated to classic, Boolean, free and monotone independences. My development is naturally divided in four topics. For the first topic I focus on free cumulants, and I use them in the study of the distribution of the anti-commutator ab + ba of two free random variables a and b. This follows up on some questions raised a while ago by Nica and Speicher in the 1990’s. I next consider the notion of convolution in the framework of a family of lattices, which goes back to work of Rota and collaborators in the 1970’s. I focus on the lattices of non-crossing partitions NC and put into evidence a certain group of semi-multiplicative functions, which encapsulate the moment-cumulant formulas and the inter-cumulant transition formulas for several known brands of cumulants in non-commutative probability. I next extend my considerations to the framework of P, which allows us to include the classical cumulants in the picture. Moreover, I do this in a more structured fashion by introducing a notion of iterative family of partitions S in P. This unifies the considerations related to NC and P, and also provides a whole gallery of new examples. Finally, it is important to make the observation that the group of semi-multiplicative functions which arise in connection to an iterative family is in fact a dual structure. Namely, it appears as the group of characters for a certain Hopf algebra over the partitions in S. In particular, the antipode promises to serve as a universal inversion tool for moment-cumulant formulas and for transition formulas between different brands of cumulants.

Daniel Perales (2022). Brands of cumulants in non-commutative probability, and relations between them. UWSpace. http://hdl.handle.net/10012/18429