A changing North: The implications of high-volume groundwater extraction and reduced water availability on sub-arctic peatland hydrology, connectivity, and geochemistry 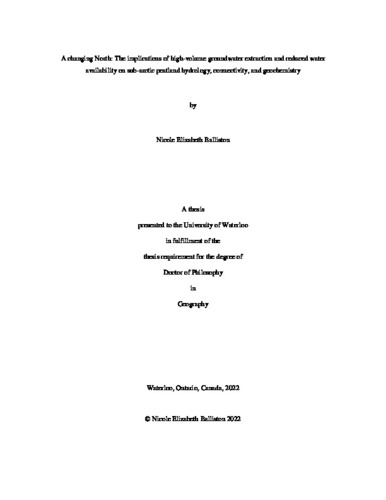 Patterned bog and fen peatlands of the Hudson Bay Lowlands (HBL) currently make up 90% of land cover in this region and form one of the largest continuous peatland complexes in the world. A globally significant storage of carbon, these peatlands are also unique ecosystems and perform valuable water regulation mechanisms in HBL watersheds. At present, the HBL region faces the increasing dual threats of resource extraction operations and increasing temperatures due to climate change, both of which may reduce water availability. In spite of their global significance, there is a dearth of information on the temporal and spatial patterns of hydrological connectivity across HBL peatland complexes, as well as the relative importance and variability of meteorological parameters. Further, studies attempting to characterize the effects of reduced water availability on hydrological structure and function in HBL peatland complexes are extremely limited. Such information is required to better understand the trajectory of these systems under future disturbance scenarios. To this end, hydrological (i.e., streamflow and groundwater levels), meteorological (i.e., precipitation, snow depth, evapotranspiration, and temperature) and hydrogeological/geochemical (i.e., porewater samples, peat depth, surface elevation, and hydrophysical properties) data were collected from both disturbed and undisturbed peatland complexes in the HBL between 2007 and 2018. Disturbed peatlands were located within the de-watering radius of the De Beers Victor Diamond Mine, located 90 km west of Attawapiskat. The undisturbed peatlands studied here were mainly within a bog-fen-tributary complex ~30 km south of the impacted transect, monitored by the Ministry of Environment, Conservation and Parks. Within the unimpacted peatland complex hydrological connectivity (the ease of water movement across the landscape) was generally highest in the spring, due to freshet, and fall, due to lower evapotranspiration losses. However, water transfer between peatland units occurred all year, including overwinter drainage through deeper unfrozen peat. Shoulder season temperatures were particularly important controls on hydrology by defining the length of the unfrozen season and partitioning snowmelt between peatland storage (if frost tables were absent) or streamflow (where frost tables were present). This region is projected to have greater temperature fluctuations, and longer unfrozen periods in the future, which will likely increase evapotranspiration and the frequency of snowmelt/ frost thaw desynchronization. The modelling of hydrological connectivity under this future scenario is recommended to better understand the long-term effects within this landscape. Within the peatlands of the mine impacted transect, large downward vertical gradients lowered water tables beyond the range of natural variability. Where depleted storage was observed subsidence of up to 15 cm occurred and was higher in peatlands with thin underlying marine sediment aquitard or where pre-consolidation pressures were low (i.e., fens). Where subsidence was measured, there was generally an accompanying decline in lateral hydraulic conductivity (Ksat); this drove bog-fen-tributary flowpaths deeper into the peat profile, thereby potentially reducing the amount of solute-rich waters that reached the surface of at downgradient fens. This altered hydrophysical state may limit further water losses in the future, however, the reduction of solute at the surface may shift these systems away from nutrient dependent fen vegetation towards ombrotrophic bogs. Hydrological connectivity is the ease of lateral water transfer downgradient that links runoff from peatlands to streamflow in downgradient channels; a state of hydrological connection occurs within patterned peatlands when the high transmissivity near surface is saturated. Where storage was depleted along the mine impacted transect, the proportion of time impacted peatlands spent in a hydrologically connected state was significantly reduced. Large bog-fen and fen-tributary gradients initially facilitated large water fluxes despite lower watertables, however reductions in water flux and even fen-tributary flux reversals occurred during the latter six years. In the downgradient tributaries, reduced lateral water inputs resulted in a lower normalized streamflow when compared to the unimpacted system, particularly in the latter half of the study period. In the majority of impacted peatlands, depleted water storage allowed for solute-poor precipitation to enter deeper in the peat profile while limiting the upwards advection of solute rich waters under fens. Post dewatering, the slow advection at depth and upwards diffusion of solute from the source (underlying marine sediment) may take decades or centuries for some solute concentrations (e.g., calcium) to recover within the most impacted locations. This may shift fens towards nutrient poor bogs; however, the equilibrium state of these peatlands is currently unknown. Future research should focus on applying the responses to disturbance here to different locations and scales of peatland complex in order to better understand the cumulative effects of these anthropogenic disturbances on the trajectory of these systems.