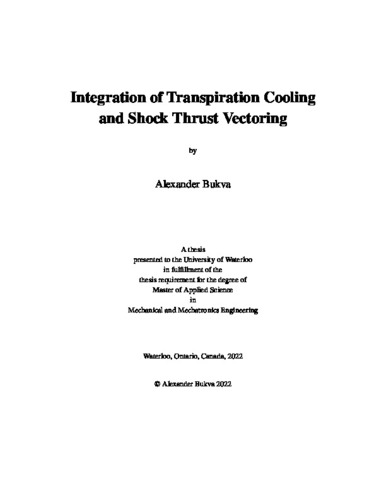 Transpiration cooling is used for active thermal protection whereas shock thrust vectoring is an attitude control approach. Both concepts rely on the injection, at the wall, of a secondary fluid into a high-speed and high-temperature flow. The purpose of this work is to investigate, using theoretical and numerical methods, how both approaches could be integrated to simultaneously provide thermal protection and vector control to small-scale aerospace vehicles. This work has two parts. Firstly, we assess Reynolds-averaged Navier-Stokes (RANS) turbulent closures for the prediction of a turbulent boundary layer with transpiration cooling via the comparison with a high-fidelity direct numerical simulation (DNS) database. This study considers the canonical zero-pressure gradient, flat-plate, turbulent boundary layer over a massively-cooled wall (𝑇𝑤𝑎𝑙𝑙 = 𝑇∞), with transpiration cooling. It is shown that the RANS-based turbulence models perform well in the qualitative estimation of the velocity and thermal boundary layer evolution at low-blowing ratios (𝐹 = 0.2 and 0.6%); more significant diferences are noted at higher blowing ratios (𝐹 = 2.0%). The RANS models, especially the Spalart-Allmaras model, over-predicts turbulence production near the wall, which results in faster growth in the boundary thickness; this error becomes more pronounced at higher blowing ratios. Despite the greater mixing of momentum, the thermal mixing is under-predicted compared to the DNS in the uniform blowing case but over-predicted for the slit case. These results suggest that modeling errors in the temperature distribution due to the turbulent thermal flux modeling can be significant even if the velocity is correctly modeled. The second part of the work investigates the integration of transpiration cooling and shock vector control (SVC). After validation against experimental data, the blowing ratio, inlet Mach number, entrance length and turbulence were varied to understand the functional relationship between these variables. The Mach line profile, which delineates the sub- from supersonic region of the flow, is a critical feature that has a direct impact on the resultant shock wave formation. The RANS model was compared to the analytical blunt body dynamic model to estimate separation distance and good agreement was found. From this result it was concluded the transpiration cooling and SVC could be reasonably integrated for single stage rockets.