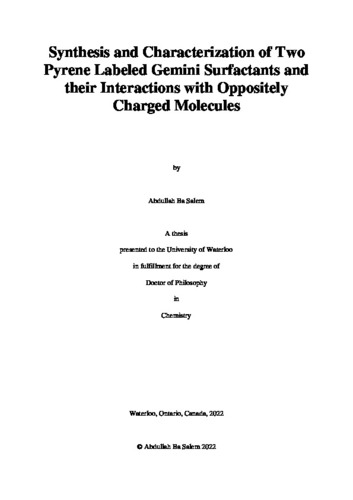 Cationic gemini surfactants (GS) have attracted the attention of the scientific community as potential carriers of genetic cargo for gene transfection applications. These GS/polynucleotides complexes have been extensively studied in the literature, although most of the focus has been geared toward the characterization of the polynucleotide component of these complexes. This thesis utilizes steady-state (SSF) and time-resolved (TRF) fluorescence in conjunction with the model free analysis (MFA) to study and characterize two gemini surfactants, which were covalently labeled with the fluorescent dye pyrene. Pyrene was selected as the fluorophore for its ability to form an excimer upon encounter between an excited and a ground-state pyrene. First, two cationic gemini surfactants denoted as Py-3-12 and PyO-3-12 were prepared and their successful synthesis was confirmed by 1H NMR. The surfactants were constituted of two dimethylammonium bromide headgroups linked by a propyl spacer, where one headgroup bore a dodecyl chain and the other headgroup bore either a 1-pyrenehexyl or a 1-pyrenemethoxyhexyl group for Py-3-12 and PyO-3-12, respectively. The properties of Py-3-12 and PyO-3-12 were investigated by determining their critical micelle concentration (CMC) and average aggregation number (Nagg). The fluorescence from the pyrene excimer was employed for the first time to determine Nagg for the micelles generated by these pyrene-labeled gemini surfactants (PyLGS). Since PyO-3-12 was shown to be more sensitive of the polarity of its local environment, it was deemed a better fluorescent probe than Py-3-12. After the behavior of the PyLGS had been characterized in solution, their interactions with other molecules were studied. The improved properties of PyO-3-12 led to the study of its complexation with the anionic surfactant sodium dodecyl sulfate (SDS). Three series of PyO-3-12 solutions were prepared, where [PyO-3-12] was kept constant at 1, 4, and 16 M, which is below the CMC of 0.33 mM of PyO-3-12, while the SDS concentration was varied from 0 to 200 mM. The SSF and MFA results showed that complexation of PyO-3-12 with SDS was complete at the equicharge point. As more SDS molecules were added to these systems, these complexes remained stable resulting in small changes in the trends obtained from the analysis of the SSF spectra and the MFA of the TRF decays. The PyO-3-12/SDS complexes were found to break down into smaller complexes as the [SDS] increased from 2 to the 8 mM CMC of SDS as a result of the incorporation of more SDS molecules into the PyO-3-12/SDS complexes. The smaller PyO-3-12/SDS complexes that existed at the CMC of SDS retained their composition for [SDS] between the CMC and 50 mM, as SDS micelles began to form. Increasing [SDS] above 50 mM led to the complete decomposition of the PyO-3-12/SDS complexes and resulted in SDS micelles hosting a single PyO-3-12 surfactant. These findings showed that the use of fluorescence techniques like SSF and the combination of TRF with the MFA provides a powerful tool to probe the interactions between PyLGS and oppositely charged surfactants at PyLGS concentrations, that were as low as 1 M, much lower than their CMC and thus low enough to enable the study of their interactions between unassociated surfactants. Other techniques such as light scattering would require far higher concentrations of surfactants to study these aggregates. The complexation of Py-3-12 and PyO-3-12 with calf thymus DNA (CT-DNA) was investigated in the fourth research chapter of this thesis. The concentrations of Py-3-12 and PyO-3-12 were kept constant below their respective CMC, while the CT-DNA concentration was varied and the (/+) ratio, representing the ratio of the [CT-DNA] expressed in base pair concentration over [PyLGS], was used to describe changes in the [CT-DNA]. Both surfactants formed stable complexes with CT-DNA over a range of (/+) ratios around unity, as indicated by the constant parameters retrieved from the analysis of the SSF spectra and the MFA of the TRF decays. PyO-3-12 also provided some insight about the polarity of the local environment inside the PyO-3-12/CT-DNA complexes, which was found to be less hydrophobic than the interior of the PyO-3-12 micelles. The stability of the PyO-3-12/CT-DNA complexes prepared with a (/+) ratio of 1.5 was further investigated as SDS, used to represent the negatively charged amphiphilic molecules found in cell membranes, was added to the solution. At low [SDS], addition of SDS molecules led to their association with the PyO-3-12/CT-DNA complexes in a process leading to the dissociation of the PyO-3-12/CT-DNA into ter-complexes made of individual CT-DNA molecules coated with a layer of positively charged PyO-3-12 further wrapped in a layer of SDS. Above an [SDS] of 0.5 mM, the DNA molecules were released from the ter-complexes leading to the formation of PyO-3-12/SDS complexes, which had been studied earlier. The complete release of CT-DNA from the PyO-3-12/CT-DNA complexes further supports the well-accepted notion that gemini surfactants are good candidates as carriers of genetic material. In summary, this thesis has developed the use of PyLGS to characterize the interactions between unassociated gemini surfactants and oppositely charged molecules like SDS and CT-DNA. Taking advantage of the outstanding sensitivity of fluorescence, these studies can be conducted at surfactant concentrations, that are 1 to 2 orders of magnitude lower than their CMC, while the photophysical properties of the pyrenyl label affords insights into the structure and conformation adopted by the complexes generated with the PyLGS.