Synthesis and Device Application of Graphene Derivatives and Quantum Dots 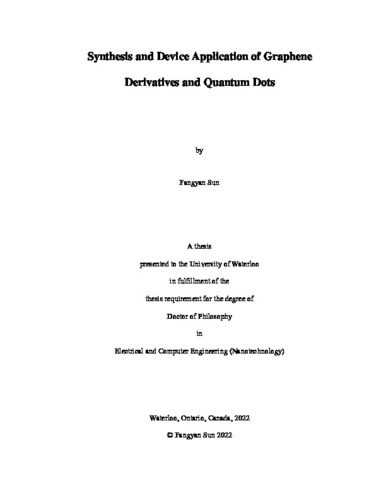 Low-dimensional materials, such as graphene, nanowire, quantum dots have emerged as attractive building blocks for optoelectronic applications, with a significant focus on diverse photodetection platforms. Graphene has sparked a lot of attention because of its unusual 2D crystal structure and extraordinary capabilities, which provide unique prospects to meet the world's ever-increasing energy demands. Substantial advancements in manufacturing of graphene-based materials and significant breakthroughs in advanced energy applications have occurred in recent years. Compared with traditional semiconductor material silicon, low-dimensional materials application in electronic devices still has a long way to achieve large-scale commercialization. This thesis focuses on graphene-based materials synthesis and application in photovoltaic devices. In this research, graphene oxide (GO) was synthesized by using the modified Hummer’s method to be applied as the precursor of reduced graphene oxide (RGO) synthesis, which was reported in Chapter 3. The improved Hummer’s method achieved a high production yield at about 50% with no toxic gases emission. The surface and edge of the GO generated have oxygenated functional groups, resulting in excellent hydrophilicity. The size of graphite was enlarged after oxidation by oxygenated functional groups adhering to the planar surface. Furthermore, a multi-layered thin film with great homogeneity was created by spin coating. The next stage was to reduce GO to RGO, which the larger size and homogenous film were made possible. RGO was generated from prepared GO utilizing a gentle and unique two-step approach using L-AA and HI as reductants to increase the electrical conductivity and optimize the work function. The prepared RGO thin film had a thickness of 20 nm with high electrical conductivity in the range of 360 - 480 S/m and increased transparency 450 – 800 nm, with a transparency of 90% or higher. The uniform RGO films were made from GO thin films with reduced defects to restore the π-π conjugation structure and remove oxygen-containing functional groups. The architectural alteration affected electrical conductivity, changing the work function. From GO to RGO, the GO was first reduced by L-AA to generate the intermediate RGO, the final RGO was developed from the transitional products utilizing HI as the reductant. The work function of GO to RGO ranged from 3.6 to 5.9 eV depending on the reduction degree. As a result, the reduction process may successfully control the RGO's electrical characteristics. The prepared RGO was used as the top gate metal on (metal-oxide-semiconductor capacitors) MOSCAP devices with excellent C-V measurement performance. The top contact (RGO), an oxide layer (SiO2), and rear contact (Al) of a basic MOSCAP device with RGO as the gate metal were all deposited using an optimized technique. The MOSCAP device's C-V curve revealed accumulation, depletion, and inversion regions. The RGO was created by thermal annealing reduction to improve electrical conductivity and reduce the contact resistance between the metal and semiconductor. RGO exhibits a high electrical conductivity of 5000 S/m due to the high C/O. Compared with Al, the work function difference between the metal and dielectric layer reduced from 0.95 eV to 0.35 eV. The findings of this study are not limited to MOS technology; they might be applied to other electronic devices that employ graphene as a conducting electrode. The GQDs were made utilizing a modified top-down approach with graphite as the beginning material. The graphite was oxidatively chopped by starting with a strong acid and then adding H2O2. The PL intensity rose with a shift in the PL peaks following the second and third step cutting, resulting in multiple color emissions. The carbon core and surface states impacted the PL spectra of GQDs. H2O2 created free radicals and sliced additional sites in the graphite sheets to improve the oxidation level to change the core size and surface functional groups. A solution with high acidity hampered the fabrication of GQD thin films, so the GQD solution was modified on pH by solution neutralization. The GQD solvent was replaced with water, and the films with high-intensity PL spectra were formed by drop-casting. The current study improves the PL intensity of GQDs over a wide range of PL peak wavelengths and allows the GQDs to be used in optoelectronic devices. The manufactured GQDs were applied in a GQD-based heterojunction photodetector system with a hole transport layer functionalized as the active layer. To improve the work function difference and increase the photocurrent, the hole transport layer compared MoO3 and PEDOT: PSS. The carrier transport and recombination rate of a GQD-based photodetector are explained using the MGB theory. GQD was functionalized with PEG to modify the ligand's length and the solution's viscosity, which improved photocurrent generation. Spin coating was used to create a GQD film with a controllable thickness of roughly 100 nm. As a result, the ON/OFF rate was enhanced even further to develop high-performance photodetector devices.