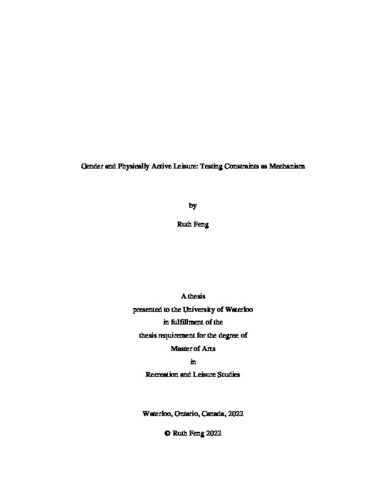 Most adults fail to achieve the minimum amount of exercise for an active lifestyle (Troiano et al., 2008), which is at least 150 minutes per week of moderate-intensity exercise or 75 minutes per week of vigorous-intensity exercise in order to receive the health benefits associated with an active lifestyle (U.S. Physical Activity Guidelines Advisory Committee, 2008). However, in an objectively measured sample, more than 95% of American adults fail to achieve 30 minutes per day on most days of the week (Troiano et al., 2008). Moreover, women tend to be less physically active than men across age groups, and women over 50 years old are more likely to be inactive than men of similar ages (Shiroma & Lee, 2010; Armstrong, Bauman, & Davies, 2000). This finding may be related to various phenomena. For example, a typical image of traditional gender roles for women is someone who is a "wilting violet" (Hochschild, 2002) who needs support from others to function fully; Women are expected to be mothers with children living at home who devote more time to housework and parenting and have less leisure time than fathers (Bianchi, Wight, & Raley, 2005; Bianchi, Robinson, & Milkie, 2006; Craig, 2006); There is also an economic gender gap with inequalities in both the quantity and quality of women's economic involvement (Medina-Claros et al., 2021). In leisure studies research, Crawford and Godbey's leisure constraints (1987) may help explain some of these inequities in access to leisure related to gender. In addition to leisure constraints, I will draw on Henderson's (1994) five stages in feminist leisure research, Bem's (1993) gender role ideology, Huyck's gender-role socialization (1999) to help explain gendered patterns of leisure participation. The factors proposed to explain these gendered constraints are agency (intrapersonal), division of domestic labor (interpersonal), and socioeconomic status (structural). They were chosen to align with both the choices of earlier researchers and the headings in Crawford's leisure constraints model.