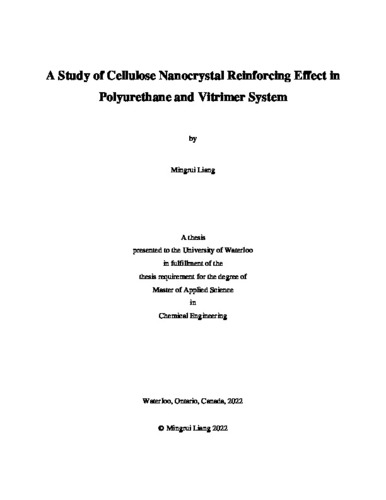 Nanocellulose-based composites and materials have received remarkable attention due to their high mechanical performance, low weight, and environmental friendliness. However, the compatibility between CNCs and polymer may vary significantly according to the polarity and hydrophobicity of polymer. The dispersity of CNCs in the polymer matrix is also critical to the physical and chemical performance of final nanocomposites. These limitations challenge the reinforcing effect of nanocellulose in nanocomposite materials in practical applications. In this study, we used both solvent casting and in situ polymerization methods to add CNCs into polymer matrices to achieve an improved performance of CNC-reinforced nanocomposites. In the first part, CNC suspension was directly mixed with waterborne polyurethane (WPU), and then a film was obtained after evaporation at room temperature. Further tensile tests confirmed the excellent reinforcing effect of CNCs, with improved values for stress of 27.8 MPa and Young’s modulus of 100.46 MPa compared to 19.6 MPa and 16.73 MPa for neat WPU. The results of scratch and friction tests exhibited better scratch resistance and increased coefficient of friction, making it a potential material for coating and packing applications. The thermal stability of CNC-reinforced nanocomposites was not influenced by the addition of CNC particles, and the 5% weight loss and maximum weight loss temperatures also remained the same. The water contact angle did change with the addition of CNCs, due to their hydrophilic features, reducing from 89° to 31°. In the second part, CNCs were incorporated into vitrimer by in situ polymerization method. CNCs were initially grafted with polycaprolactone (PCL) to allow CNCs to be directly incorporated into the synthesis of vitrimer material. The addition of PCL-grafted-CNCs (PCL) increased the tensile strength and storage modulus of the vitrimer both at room temperature and above the glass transition temperature (Tg). The CNC-vitrimer composites were all insoluble in toluene even at high temperatures, suggesting a three-dimensional network was formed. Furthermore, after several reprocessing cycles, the CNC-vitrimer still displayed good mechanical properties. The effect of PCL-CNCs on the vitrimer system was also evaluated by dynamic mechanical analysis, differential scanning calorimetry, thermogravimetric analysis, and swelling tests. It was found that the addition of polycaprolactone-grafted-CNCs (PCL-CNCs) increased the temperature values for the melting point, crystallization, and glass transition. Also, the gradual decrease in activation energy with the increased amount of PCL-CNCs reflect that the stress relaxation behavior is less sensitive to the temperature. The thermo-dynamic properties are controlled by the concentration of PCL-CNCs. When PCL-CNCs were at lower amounts, the hydroxyl and ester groups dominate the covalent adaptable networks (CANs) dynamic, leading to a faster stress relaxation behavior. However, when the amount of PCL-CNC increased, the crystals and aggregation started to constrain the mobility of polymer chain, resulting a longer stress relaxation time.