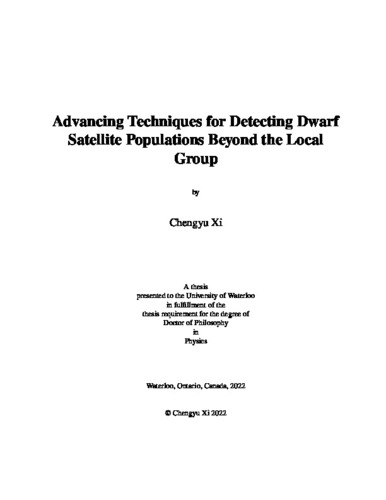 This thesis includes material from three papers that develop techniques for quantifying faint dwarf satellite populations outside the Local Group. Dwarf satellites are important for our understanding of small-scale structure formation, the history of galaxy formation, and the nature of dark matter. Identifying faint satellites is technically challenging, however, because accurate distance information for these objects is usually unavailable and very expensive to obtain. In Chapter 2 we test a previously proposed method of estimating the average satellite population around nearby bright galaxies. The method uses structural cuts on size and magnitude to preferentially select low-redshift dwarf galaxies, and clustering to estimate the faction of true satellites within the selected sample. Using the high-precision photometric redshifts of the COSMOS survey, we were able to test the effectiveness of different structural cuts and optimize them for several different redshift ranges. We also describe a set of very nearby dwarf galaxies (at distances D < 200 Mpc) identified morphologically in the COSMOS field. In chapters 3 and 4, we introduce a new method for quantifying satellite abundance specifically designed for samples with high-quality photometric redshifts. The method allows us to measure satellite abundance around primaries in crowded fields, improving on previous methods that considered only isolated systems. The method also avoids the use of spectroscopic redshifts, which makes it much more expensive in observation time to reach a given depth in the satellite population. Chapter 3 focuses on establishing and testing the method, and presents some initial science results. In Chapter 4, we measure various satellite properties, including the satellite stellar mass function, the relative stellar mass function, and the quiescent fraction, as well as their dependence on primary properties such as mass, colour and specific star formation rate.